I'm not as sold on the Florida Derby runners as some others are. Yes, I am writing this before March 31 when the Florida Derby takes place at Gulfstream Park. The reason I am is because unless Audible absolutely blows his competition out of the water, he's not making my Top 5. In fact, he'd have to win by around 15 lengths to make this Top 5.

Check out my Top 5 to win the Run for the Roses heading into April's prep races. 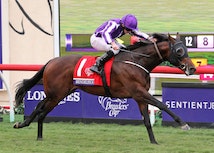 Mendelssohn is bred to relish the dirt. He was sired by Scat Daddy. Not only that, but Mendelssohn was born in Kentucky. He's a U.S. horse that Michael Tabor, John and Susan Magnier, and Derek Smith sent to Aidan O'Brien too train.

I believe the fact that he can win on turf means he might be a super horse. We're going to find out on March 31, that's for sure.

He seemed to lose interest after bumping with McKinzie in the stretch. One thing I will write is that Bolt D'Oro sure looked like he was going to blow by McKinzie before the two bumped. Another thing to notice is that it was the first time the great Javier Castellano road the son of Medaglia d'Oro. If Mick Ruiz has him cranked up for the Santa Anita Derby, it's going to be difficult to see any other horse beating him.

Unless, McKinzie improves as well. I've got a couple of Baffert horses on this list. McKinzie is the one that I like more. The reason is because he reminds me some of Real Quiet in the sense that although he's run well in every race, he hasn't yet put it all together. If he does, he might not show it until the First Saturday in May. That's the way Bob used to train his three-year-olds.

I can't wait for the Arkansas Derby on April 14. Magnum Moon versus Justify? Magnum Moon rates
slightly ahead of Justify because he's got a bit more seasoning. I also love that jockey Luis Saez rides Magnum Moon. Saez was up to 5 wins at Gulfstream on March 29 by the end of Race 7.

Magnum Moon has every right to improve in the Arkansas Derby. He only must battle with Justify to show the improvement needed for me to keep him in my Top 5.

Unfortunately, I couldn't find the video of Justify's maiden score. No worries. Most horseplayers know how Justify dominated in his 9.5 length maiden score. He's got the breeding. He absolutely has the trainer. Could Justify break the curse of a horse that didn't run at two not winning the Derby since 1882?

Good luck this weekend if you're playing the Dubai World Cup races as well as Gulfstream Park's card on May 31!