2018 Kentucky Derby: Will the Florida Derby Produce the Favorite?

The Florida Derby, one of the top prep races for the May 5 Kentucky Derby, takes place this Saturday on March 31. Some of the top 3-year-olds in the nation, including Catholic Boy, Promises Fulfilled and Audible, head to Gulfstream Park's Racetrack for the Florida Derby.

The 2017 Florida Derby produced the Run for the Roses race favorite when the Todd Pletcher trained Always Dreaming went off at 9/2. 9/2 odds made Always Dreaming the Derby favorite.

Will this year's Florida Derby produce the 2018 Kentucky Derby favorite?

2018 Kentucky Derby:  Will the Florida Derby Produce the Favorite?

Last year, Always Dreaming faced a relatively weak field in the Florida Derby. His top competition was Gunnevera, who went off the even money favorite, and State of Honor who went off at 4 to 1. State of Honor finished second. Gunnevera finished third. The other horses in last year's Florida Derby were (in order of finish):  Impressive Edge, Three Rules, Talk Logistics, Coleman Rocky, Unbridled Holiday, Charlie the Greek, and Quinientos.

Storm Runner is also entered. The Dale Romans trainee didn't run well in the Fountain of Youth. There's some reason to believe he bounces back on Saturday. Why not? After breaking his maiden, he finished  off the board. Then, he beat Mississippi in an allowance race. 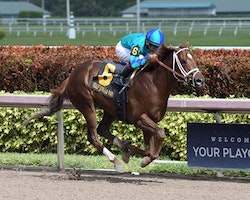 Simply put, it's going to be much tougher for Audible to beat Mississippi, Storm Runner, Strike Power, Catholic Boy and Promises Fulfilled than it was for Always Dreaming to simply beat State of Honor and Gunnevera.

Even if Audible Wins Impressively, He Won't Go Off As the Derby Favorite

Even if Audible wins impressively on March 31, he most likely won't go off the Kentucky Derby favorite. There are a couple of reasons why:

The best three-year-old last year until West Coast won the Travers Stakes was probably Classic Empire. Classic Empire was heads and tails above his competition. On a fair track, he might have dominated the 2017 Kentucky Derby.

When you think about it, 2017 Kentucky Derby wasn't all that deep. Because Always Dreaming was a 9/2 favorite, the impression was that it was a deep Derby field. Really, it wasn't.

That same can't be said for this year's Kentucky Derby. McKinzie, Bob Baffert's top prospect, is healthy and ready to go. He's likely to finish no worse than second in the Santa Anita Derby. Baffert also has Justify. If Justify wins the Arkansas Derby, no matter what history says, he's a contender on the First Saturday in May.

Audible could pull an Always Dreaming in the Florida Derby on March 31. But, even if he does, it's hard to envision Audible going off as the favorite in the Run for the Roses.