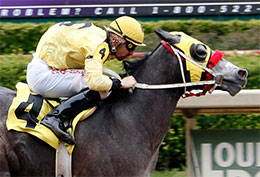 The first official futurity of the year, the $273,054 Mardi Gras Futurity (RG2), is set for Saturday, March 12 at Louisiana Downs.  From 111 juveniles that ran in trials on February 20,  a very nice group of Louisiana-breds has qualified for the 300-yard final.

Miguel A. Aguilar's Rdd Lajollanfastdash was the winner of the sixth trial, crossing the wire in :15.531, the fastest clocking of the afternoon. Richard Dale Domingue of Youngsville, Louisiana, bred his Streakin La Jolla mare La Jollan Queen to Heza Fast Dash, citing the sire as a "proven producer".

Trainer Willie Simien, Jr. and Aguilar purchased several yearlings at the 2015 LQHBA Yearling Sale, and signed a $10,000 ticket for Rdd Lajollanfastdash. Simien liked his pedigree, noting his "long, straight legs", but didn't think at the time that he would be the best of his 2016 racing prospects.

However, that impression changed after his first breeze, and became even more evident following his schooling race on January 29, when he drew off by 3 1/4 lengths.

"His exact words were 'Willie, don't take me off this one," recalled the 27-year-old trainer.

Rdd Lajollanfastdash has progressed flawlessly in 2016, and his connections are hopeful he will live up to his billing in the final, and receive the winner's check for $122,874.

However, from a handicapping standpoint, the fastest qualifiers have not fared well in the last three runnings of the Mardi Gras Futurity. Ana Alvidrez's Magic Black Jack, at 8-1 under David Alvarez, won last year's final, with fastest qualifier One Tough Fox finishing fifth. Hemps Jumpn Lajolla ($25.80), owned and trained by Miguel Rodriguez won in 2014 as fastest qualifier, Dynastys Jumpin, was disqualified and placed seventh. In 2013, Sandra Sue Blue, at 33-1, was the gate-to-wire spoiler.

So several others in the field should get a look from the wagering public, including second-fastest qualifier, Streakin Pyc, bred by Leroy Fontenot (David, feel free to link Ryan Sherman's story here, if you can) and trained by Wendy Garcia. Pina-Garcia Ranch purchased the son of Jls Party Wagon from the Streakin La Jolla mare Electric La Jolla for $11,000 at the LQHBA Yearling Sale. Gamepatriotdeluxe qualified in the eleventh trial, as the runner-up to Juan J. Bazaldua's Jess A Little Star. Grant Farms LLC bred the son of Game Patriot, who is trained by Michael Taylor for owners Ten For Ten. The $33,000 LQHBA Yearling graduate was clocked in : 15.892, the fourth-fastest time of the day.

The eight-race card Saturday at Louisiana Downs also includes the final of the $86,190 Mardi Gras Derby.  Ramirez will ride Jess A Saint and David Alvarez returns aboard My Favorite Blue. Both runners shared the fastest time in trials, covering 400-yards in :20.041 seconds.