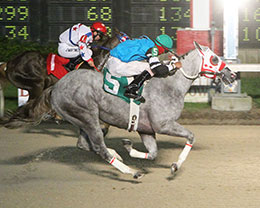 In trials run on April 30, Douglas O. Traylor’s Royal Quick Patriot set the fastest time of the evening, winning his trial in :16.911 seconds under rider Donald Watson.  Installed as the favorite at odds of 5-2, Watson will have the return call on the son of Jet Black Patriot.  His other runners are First Prize Bourban, who drew the rail and will be ridden by David Alvarez; Blue Courage with Donell Blake up and longshot Bbang, who will break from post position nine under Lucas Constantin.

Roberts has won the Laddie Futurity twice, scoring with Heroes Bet in 1992 and Sky Ranger in 1998.

Trainer Michael Taylor, who saddled Louisiana Jewels, the winner in Friday's $298,000 Lassie Futurity,  will send out Dash To Intrigue, who will break from the far outside post. Joe Badilla, who has ridden the son of Dashing Bye to his last two victories, retains the mount.

Another interesting contender is Dragon N Panther, who broke his maiden in his trial win. He is trained by former jockey, Saul Ramirez, Jr. and will be ridden by younger brother, J. R. Ramirez, who returned to the saddle after taking three years off.

Post time for Saturday's card is 6:15 pm with the Laddie to run as race 8.