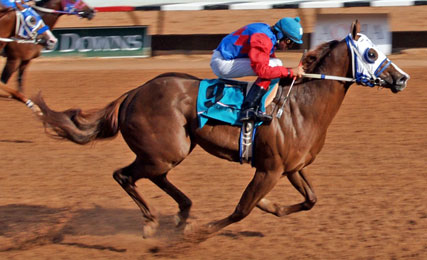 The first running of the first All American Futurity took place in 1959 with Galobar taking the inaugural running of the race originally run at 400 yards. Beginning in 1973, the distance was changed to 440 yards, which is a quarter of a mile. It is Quarter Horse's equivalent to the Kentucky Derby, held on the first Saturday in May at Churchill Downs. Ruidoso Downs in Ruidoso, New Mexico, has crowned its share of racing champions. The Kentucky Derby is often referred to as the "most exciting two minutes in sports"; Quarter Horses will run their final in 21 seconds or less!

Owners from anywhere in the country can nominate their yearling to the All American Futurity, and make a series of payments which entitle their horse to run in trials. Once run in one very long day, the trials are now drawn for two consecutive days. This year, 17 trials were held on August 21 and 22, with the fastest five runners from each day advancing to the final set for Monday, September 7.

The post time favoritism for this year's field will be divided between First Valiant Sign and One Fabulous Eagle, with the post position draw slated for Thursday, September 3.

On Saturday, September 5, the nine-race program will be highlighted by the running of the $200,000 All American Gold Cup. Graded stakes winners Houdini, Too Flash for You and J Bar headline the 440 yard stakes.

Three-year-olds will vie for a record purse of $2.3 million in the Grade 1, All American Derby. Apollitical Blood, trained by Juan Aleman was the fastest qualifier in trials run on August 23.  His toughest rival is likely to be Rainbow Derby victor, Kiss My Hocks.

There will be a special post time of noon (MT) for Saturday, Sunday and Monday's racing cards.