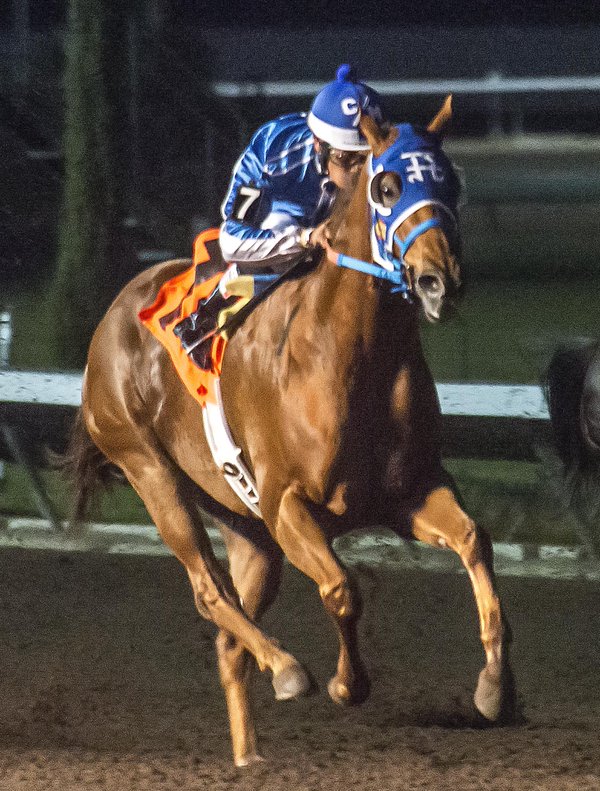 There was no Champion of Champions in 2015, but the 2016 edition of the prestigious invitational stakes was worth waiting for!  The Grade 1, $600,000 Champion of Champions will take place Saturday night at Los Alamitos in Cypress, California with a sensational field of ten of the top older Quarter Horses in North America.

S-Quarter K LLC’s Heza Dasha Fire was installed as the 7-5 morning line favorite and will break from the far outside post under leading Los Alamitos Quarter Horse rider, Cruz Mendez. He has only tasted defeat in one of his 11 career efforts and boasts earnings of $1,389,388.

Moonist, one of the top older Quarter Horses in the country, is nothing short of a win machine! Owned by Ron Hartley and trained by John Cooper, the California-bred was honored as AQHA 2014 champion 3-year-old gelding and is having a highly successful 4-year-old season. The 11-time stakes winner at Los Alamitos Race Course will be ridden by regular pilot, Cesar De Alba, from post position seven.

Other entrants include Edward Allred's Quirky, one of two fillies in the field and winner of her last five starts and Vessels Maturity champion, Far Niente. Remington Park horse of the Meet, Dashin Brown Streak is 12-1, but will have his share of support with jockey G. R. Carter riding his last Champion of Champions. The 47-year-old rider, who is the all-time winning rider in Quarter Horse history, will hang up his tack after next weekend's EVD Futurity.

It is a very good chance that the Champion of Champions winner will also be crowned 2015 AQHA world champion. It's a big weekend at Los Alamitos with the Champion of Champions set as the ninth race of Saturday night's card and the Los Alamitos $2 Million Futurity (G1) on Sunday, December 13. Fastest qualifier Docs Best Card and Ima Fearless Hero are two of the top contenders in the rich race for 2-year-olds.
Racing
Loading...