My friend Carly always uses the term “Awk” which is what the kids apparently say instead of spelling out the word awkward. Well there have always been plenty of awkward moments in horse racing, but these are the seven times I remember thinking “well this is awkward”.

1. Harry Aleo Interview about Lost in the Fog

Quint Kessenich was toast the minute he asked the first question. “What is the current price tag on this horse?” Huh? What the hell kind of question is that to ask a minute before a huge race. Well Harry Aleo thought it was as ridiculous as we all did and told Quint what he thought about the question. Then, as if that wasn’t enough, Quint asks him to compare having a nice horse to fighting in World War 2? Harry gives a classic answer and the silence afterward is great. Then, the always fantastic Kenny Mayne comes on the air and sums it up as only he can. “Well I guess he didn’t like that question.”

Really, I could have put any Steve Coburn interview on the list. The time after the Preakness when he told Churchill they could learn a thing or two from Pimlico. The time on TVG when he said he was worried about getting beheaded in Dubai. He really is the ‘King of Awk.” But the Belmont post race interview is his Sgt. Peppers of awkward interviews. You figure they’re gonna cut to him and he’ll congratulate the winner and say how proud he is of his horse. Nope. He goes off like a rocket about the rules and how it’s not fair and the cowards way out and everything. Kenny Rice asks him to clarify his statements and he just keeps going. His wife tries to stop him and he snaps at her on national television. It was so great. Behold the best post race interview ever. 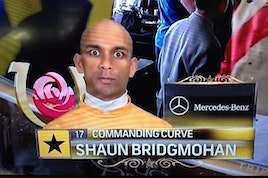 I’ve seen Shawn Bridgmohan in person and on television and he seems a perfectly nice looking guy with a great smile. Well in the Kentucky Derby photo shoot for NBC back in 2014 he apparently wasn’t so jovial. As they were going through the field showing the jockeys, Shawn Bridgmohan was apparently abducted by aliens because the look on his face and eyes showed that something happened to him. I remember stopping in my tracks thinking “that isn’t Shawn Bridgmohan. But it was. And it was awkward.

The Breeders’ Cup is often called the super bowl of racing. Well in 2010 it turned into the WBA Lightweight Championship bout as Calvin Borel and Javier Castellano got into a fight on national television after the first Breeders’ Cup race. They kept the camera on Calvin (he had won 3 out of 4 Derby’s at this point and was the biggest star in the sport) as he continually tried to go after Javier. I can’t imagine what happened to start this whole thing but it was pretty awkward watching the biggest name in our sport at the time try and pick a fight.

I’ve kind of always found beefcake photos a little awkward. But when you are on horseback with no shirt on (Putin I’m looking at you!) it’s gonna be weird. So when the jockey’s got together to make a beefcake calendar back in 2011, it was a little strange. These guys are all in great shape and all have six pack abs, but maybe I’m just used to seeing them in helmets and silks. It was pretty strange.

Maria Borell tweeted that she went from having the best day of her life to the worst day of her life as the day after the Breeders’ Cup she was fired as the trainer of Runhappy. It was a pretty crappy move by the owners but then Maria took to twitter to talk about it which is always kind of strange seeing personal laundry aired on social media. Maria seemed to have all of the racing world on her side until some strange videos were posted about her property and then a GoFundMe was started. It kind of all just went downhill from there in the awkward department.

So this one really is probably the least awkward on the list. What cracks me up about it so much is after Bob asks where his camera is and they finally show him, he looks so beyond mad as he’s staring down at the ground. He doesn’t really even try to turn on the charm when he starts the broadcast he just goes. Live TV is bound to have stuff like this happen, it’s just always kind of funny and kind of weird when we see these folks not scripted.