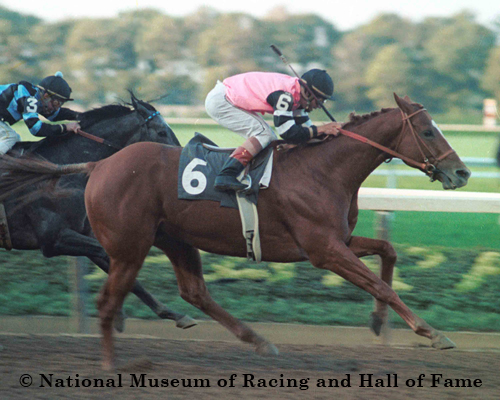 Check out the video of Affirmed's historic 1978 Belmont Stakes win , in which he captures the Triple Crown with jockey Steve Cauthen, defeating long-standing rival Alydar:

A Brief History of Affirmed

Affirmed is best known as the last horse to win the Triple Crown. He won the Kentucky Derby, Preakness Stakes, and Belmont Stakes in 1978, becoming just the 11th horse in history to do so, and the most recent.

Inducted into the Racing Hall of Fame in 1980, Affirmed was also recognized as Horse of the Year in 1978 and 1979. The storied rivalry between Affirmed and Alydar is among the best stories in Thoroughbred racing – Affirmed and Alydar met on ten different occasions, including all three Triple Crown races and a thrilling stretch duel in the Belmont Stakes. He also won multiple stakes races at Santa Anita and Belmont Park.

Bred in Florida, Affirmed is by Exclusive Native, a son of the legendary sire Raise a Native, by Native Dancer. Exclusive Native also sired one of the few fillies to win the Kentucky Derby, Genuine Risk. His dam, Won’t Tell You, traced her bloodlines through sire Crafty Admiral to another Triple Crown winner, War Admiral.

Affirmed was euthanized in 2001 following a battle with laminitis and was buried at Jonabell Farm in Lexington, KY, wearing the pink colors of his original owners and breeders, Harbor View Farm.

Scroll over any box below to view the historical records for Affirmed:

Affirmed has been a part of some of the most memorable horse racing results of all time. Click the link below to view his complete racing record.
Click Here to View Full Table