Color is an important component of Thoroughbred racing’s visual appeal, one example being the silks worn by jockeys. As handicappers and racing fans attempt to track their rooting interests throughout the duration of a race, these colorful owner silks are one of the main differentiators to lean on.

TwinSpires is excited to bring two new features for Android mobile users. One new feature is the presence of jockey silks to aid users in identifying runners of interest in both the program and while watching the live racing video.

Over the decades, certain silk designs associated with famous stables and their champions have become iconic and identifiable to racing fans everywhere. Here are five examples:

Calumet Farm: The stable’s former colors of devil’s red and blue were worn to victory by a record eight winners of the Kentucky Derby, including the Triple Crown heroes Citation and Whirlaway. The list of its other champions and Hall of Famers is similarly long.

Meadow Stable: The blue and white blocks, with blue- and white-striped sleeves, are most notably associated with Secretariat, the 20th century’s most acclaimed runner. Before him, the Chenery family’s colors were adorned by Hall of Famers Hill Prince, Cicada, and Riva Ridge.

Phipps Stable: The simple black jacket with cherry cap has been a ubiquitous presence on the turf’s biggest stages for nearly a century. Legendary runners representing the stable include Buckpasser, Personal Ensign, and Easy Goer.

Belair Stud: The Woodward family’s white jacket with red polka dots and cap are most closely associated with great three-year-olds. Among these were Triple Crown champions Gallant Fox and Omaha, and the dual classic winners Nashua and Damascus.

Rokeby Stable: The late Paul Mellon’s gray jacket with yellow braids, sleeves, and cap achieved legendary status from the 1960s through the early 1990s, especially at Saratoga. Horses of the Year Arts and Letters and Fort Marcy, and Kentucky Derby winner Sea Hero, were notable representatives. 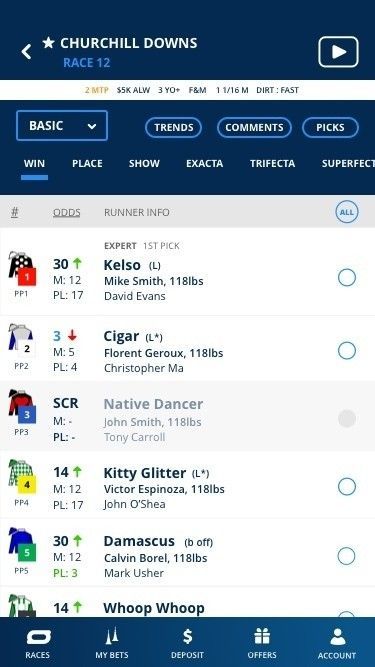