Another Historic Day At Palm Beach

Does this place have a flare for the dramatic or what?

The Palm Beach Kennel Club once again put together a day for the ages, as two of their superstars pull off unbelievable feats in last Friday's Matinee.

Sg's Tom Seaver from the Janie Carroll Kennel was up first in the 12th Race, as the young flamethrower completed the undefeated climb up the Grade Ladder.  The 29.46 secs victory was the first completed Ladder at Palm Beach since the Queen herself JS SpeedyPebbles pulled off 8 straight to start her career.

Grade Ladders are hard to pull off and doesn't happen very often. It actually has happened only 6 times since the Club opened in 1932.  The win surprised veteran trainer Crystal Carroll. "I knew the pup could run when I was schooling him out, but I never even thought ladder climb.  Needless to say, I was shocked.  I don't think I've had a greyhound complete one of these, surely not at a track with an extra grade."

You could tell from the scorching times we were seeing all day that anything was possible.  Then Ethel Is Here stepped up in the 14th. 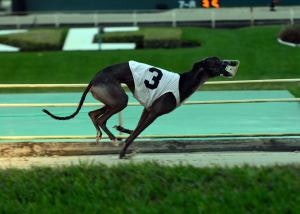 The record holder was already on a tear coming into the day, with 8 wins in her last 10 starts.  Nobody on the 3/8ths mile has been able to touch her since she returned to racing this summer.

Track Announcer Mike Jameson has seen days like this before.  He was of course a part of the greatest day ever at Palm Beach last summer, when the Sprint and Marathon records went down in the same day back on July 24th.  Before Ethel loaded in for the start, Jameson knew something was about to happen.  "I told Dale Simons (Other Track Announcer) before the race that if she broke remotely well that she was going to set a new record.  She didn't disappoint!" 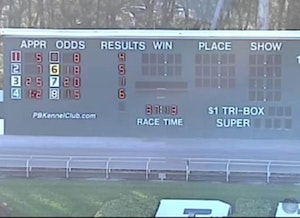 That she didn't. Ethel smashed her own previous record on the Rhonda Course with a 37.13 secs victory, further cementing her status as legendary in South Florida.  The Janie Carroll Kennel gets another record breaking performance from their superstar.

"Ethel's just phenomenal" says Carroll.  "Seeing her break her own record afterwards is something I'll probably never see again.  I've been in love with Ethel long before we knew how good she was.  Watching her do what she's done makes her that much more special."

What's next for the two stars?  Seaver will most likely see Palm Beach's finest A Graders in his upcoming races, as he pursues SpeedyPebbles' record start.  Ethel Is Here is gearing up for the $50,000 James W. Paul Derby coming up in February, which she no doubt will be the heavy favorite.

Congratulations to Janie Carroll's entire crew on the accomplishments of their racers.  To have this happen in the same day to the same Team is just remarkable.

It just goes to show you that anything can happen in greyhound racing, especially at Palm Beach. Whoever wrote the script for this card certainly loves entertainment.

Replay of Ethel Is Here's Race: