Records are made to be broken....but the amount of times it has happened this season at Palm Beach has just been staggering.

South Florida's newest puppy sensation Craigie Renegade (KC And All - Toni Works) from Rader Racing put his name into the history books Monday by hammering home a 16.34 secs victory on the super sprint course.  This blazing run broke his teammate Kb's Like A Fox's course record of 16.37 secs that Fox had just set last October.

This now brings the record smashing total at Palm Beach by its athletes up to 5 this season, including every distance record.

Owner Steve Sarras was more then thrilled about this accomplishment.

"It feels good to be back in the record books at Palm Beach" says Sarras, whose greyhound Rob Gronkowski previously owned the sprint record here.  "We knew Renegade was going to be a really good super sprinter when we got him at the Nationals because of how he exploded out of the box.  He struggled as a sprinter at Naples but I knew he would find success at Palm Beach.  He's a special greyhound.  Kennel owners Norm and Yong Rader have done a phenomenal job with him."

At 20 months old, Renegade has exceeded expectations already.  Did Sarras know he was going to be this good this early?

"No, I couldn't have predicted this much success already for him," says Sarras. "When he lost his race last time out, I knew he would come out firing today. The great ones absolutely hate to lose and he seems a lot like that."

Norm Rader was also ecstatic about the record. "Renegade never misses his break," Rader says. "These great 3/16 dogs always show up in my Kennel, from Bae Sang, to Fox and now him. Incredible" 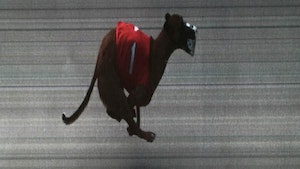 What's next for the young superstar?  With the summer racing season around the corner, Sarras and co-owner James Zawisa plan on bringing Renegade to Southland Park in West Memphis, Arkansas very soon.  Renegade will get a chance to run for the biggest purses in greyhound racing, including a piece of the $880,000 Festival of Stakes Series later this year in October.

Congratulations to all of Craigie Renegade's connections on this historic feat.  The greyhounds at "The Beach" wrote yet again another amazing script for us fans to watch and enjoy. What else could possibly happen this season?  Just sit back and enjoy the ride folks.

Other distance records broken this season at Palm Beach: