AQHA Racing Champions To Be Announced on Wednesday

The Quarter Horse racing industry will have their version of the Eclipse Awards on Wednesday, January 18 when the

2016 AQHA Racing Champions will be announced. The presentations will take place at Heritage Place in Oklahoma City in a ceremony which will be webcast beginning at 5:00 pm (Central).

The awards will include top Quarter Horse champion in Mexico, Canada, 2-year-old, 3-year-old, aged stallion, filly and mare and distance horse.  Honors will also be bestowed to champion breeder, owner, trainer and jockey for 2015.  Of course, the biggest award is the announcement of AQHA world champion, based on votes from a national committee of Quarter Horse racing and industry experts.

The notable world champion contenders from 2016 include top 2-year-old, Imperial Eagle, winner of the $3 million All American Futurity (G1) at Ruidoso Downs; EC Jet, who was victorious in the $2.4 million All American Derby and Jessies First Down, who has won three Grade 1 stakes this year.  Champion trainer honors are likely to go to Judd Kearl, who topped all Quarter Horse conditioners in both wins and purses in 2016. 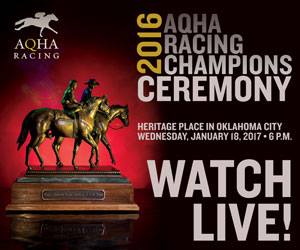 Esgar Ramirez had a stellar year in the saddle, winning both the All American Futurity and Derby. He is a prime candidate for AQHA champion jockey with Louisiana-based David Alvarez topping all riders with 122 wins for the year.

Chris Kotulak, racing analyst for Remington Park, will emcee the ceremony and fans can watch it in its entirety on www.aqharacing.com in your web browser.

A complete list of all the champion contenders is available on aqha.com.  Good luck to all the honorees!