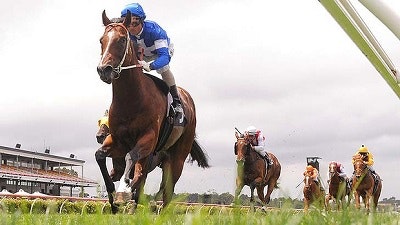 Big day today! Especially if you’re one of Australia’s premier 2YR old Thoroughbreds! And if you're a fan of making a quality bet: even better!

So without going on anymore, let’s take a look at the great days racing that we have on offer at Caulfield racecourse, where we are being absolutely spoiled with a total of 8 graded stakes races, 3 of them grade 1’s,  including the 2014 edition of the Grade 1 Sportingbet Blue Diamond Stakes, the premier 2YR old stallion making race.

NOT LISTENIN'TOME had a terrific first prep culminating in a G1 second to Zoustar beating home LION OF BELFORT and THERMAL CURRENT, he now meets them both at much better weights and I think it’s fair to expect he has got better since his first campaign. CONSORTING has definitely got talent and has been competitive with these in Group class without having much luck; he is a good long shot.

SPIRITS DANCE is fit here today, she has been running great times and sectionals, big chance. MARIANNE may be able to turn the tables on her today seeing as she has a weight advantage today, she was flying home last start and that was 1st up. BOUND FOR EARTH will definitely have come on from the wide run first up and she will also be fitter. METAPHORICAL resumes, she showed enough in her first prep and there is good form through her races. DIAMOND GLOW has quality and you must forget her last start, she can really come on and challenge here today!

VILANOVA really needs to stand up here today! His last couple have certainly been inconclusive but today he gets a weight scale that really suits him. SAGUARO looks to be pretty promising, as does DELIBERATE. BRING SOMETHING is talented individual who really had no chance fresh, and his run last prep in the Stutt Stakes warrants respect here today. ALPHA BEAT, JADE'S BOY and CALENDAR LAD all have claims.

This race will be won on tactics! FIORENTE is the class, resuming at 1800m is perfect, and he has been doing everything right at his trials. STAR ROLLING just missed 2nd-up when fancy match-fitness of winner told, his other 1800m run was a terrific win, he can peak/win. PAKAL went back in that same race as STAR ROLLING and had no hope when leaders crawled up in front the first 800m, he ran good splits and will be closer today! FORETELLER ran home well last start and he won a grade 1 last prep 2nd up. GREEN MOON has to be a hope fresh at 1800m.

MOMENT OF CHANGE did win the Orr Stakes well and was only 2nd-up, he is unbeaten (3 from 3) here at 1400! BULL POINT was a nice winner when resuming and he can measure up to these older horses at WFA. SIZZLING made a nice return in Sydney; he ran superb last go 2nd up so he can measure up today. POLANSKI is a mystery, false starts twice this time in so you have to be careful with him.

Most people will tell you it’s as simple as RUBICK Vs EARTHQUAKE…I think I agree! Funny thing is I have always been a strong Colt will beat a Strong Filly…..not today! RUBICK's Prelude was impressive; he worked hard, did it all and won while others faded. EARTHQUAKE’s race was run roughly 6L slower than RUBICK's yet she recorded the same overall time and has not had a hard run. She toyed with her rivals and looked special. NOSTRADAMUS & CHIVALRY sit closer and both want 1200. NAYELI & JABALI are trifecta hopes

LANKAN RUPEE really impressed fresh this track/trip and ran the time, Grade 1 races are tougher but I think he will measure up. SHAMAL WIND also looked the goods in that first win and she has always had the class to win a Grade 1! FLAMBERGE has been freshened up and trialled well with Bel Sprinter, so that has to be a good pointer. BEL SPRINTER sailed by Snitzerland fresh a while back, but the weight is an impost. VATICAN has to go in out of respect. TEMPLE OF BOOM is a chance too.

BONARIA was only clear at the very end last start and flew at the line; she will really give it a shake today based on that. BIPPO NO BUNGUS ran very well in the same race, hard luck story as well. HAIL LIL went super fresh and she will be in this for a long way. HAZARD and DANESTROEM certainly have to be considered as having decent claims. I do like ARINOSA as well. KEEP DA ROSE is a potential talent so be wary of her as well.