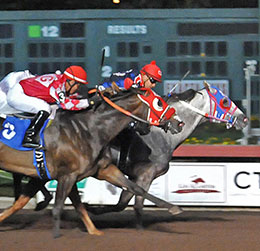 Lone Star Park in Grand Prairie, Texas will host a national championship, the 2015 Bank of America Challenge Championships on November 6 and 7.

There are a total of 12 stakes races including the six championship races that offer more than $1 million in purses and prizes. The marquee event on Saturday, November 7 is the $350,000 Bank of America Challenge Championship for older horses competing at 440 yards. Regional qualifiers include Jake Gold Br, Daytona B, Mr Big, Sign of Corona, Rockin Disco, Eyesa Famous Eagle and Rocketair. The winner will earn a berth to the $600,000 Champion of Champions (G1) at Los Alamitos in December.

Lone Star Park and the Paulick Report have joined forces to give one lucky fan and their guest an opportunity to win a trip to Lone Star Park at Grand Prairie, Texas near Dallas for the 2015 Bank of America Challenge Championships on November 6 and 7. The lucky winner will receive a $1,000.00 Airfare credit, plus two (2) night hotel stay at the Hilton Arlington, Texas, the official hotel for the American Quarter Horse Association event. The winner will also receive free Admission and Programs, a table in Silks Dining Terraces for both November 6 and 7, plus $500.00 in Lone Star Bucks which can be used to purchase food & beverage, gift shop items and wagers.

To enter and see the complete rules follow this link http://bit.ly/ChampionshipTrip which can also be found on Lone Star Park's Facebook page.

Much more on the Bank of America Challenge to come!