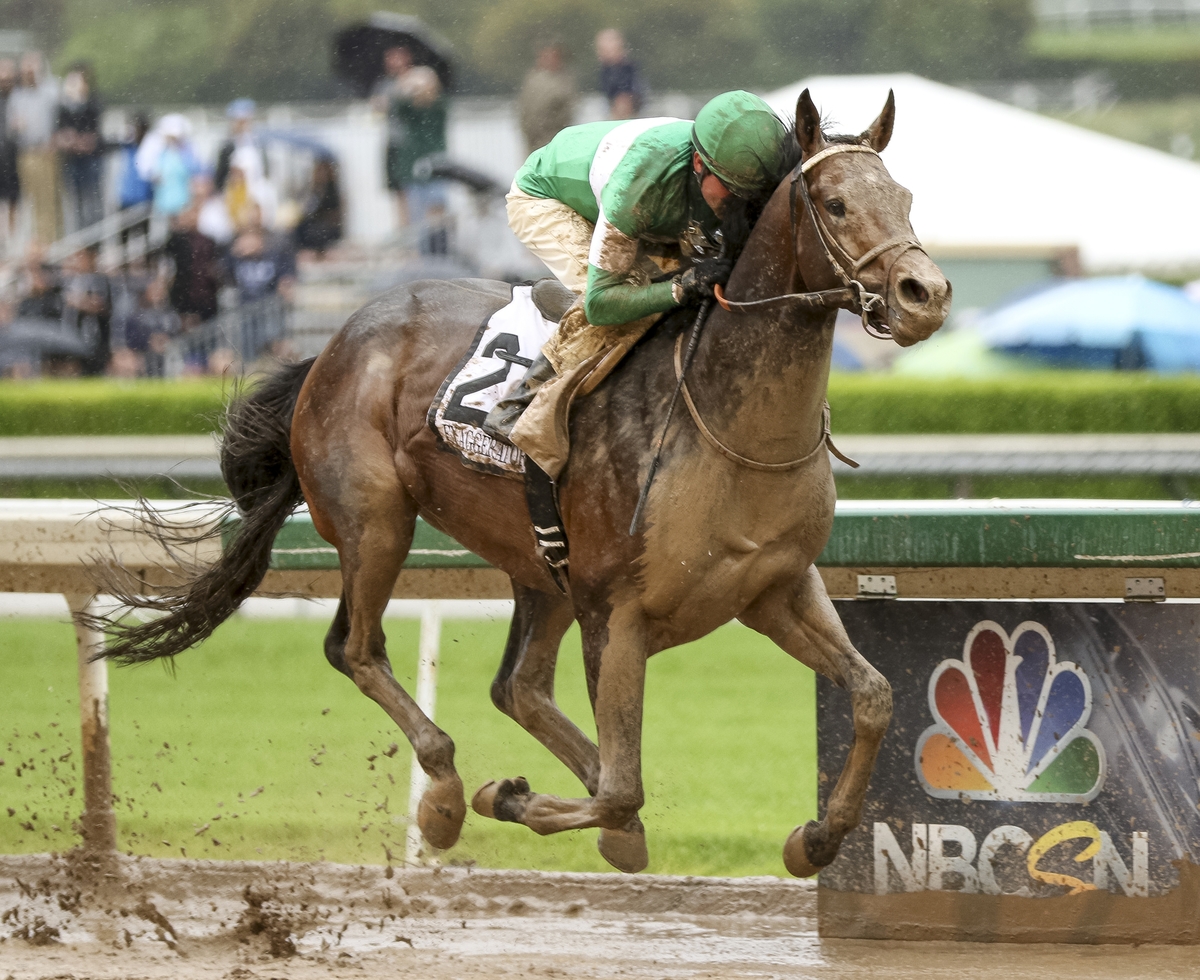 Exaggerator relished the slop and blew away his rivals in what I thought was the most impressive performance of the three big Derby preps on Saturday. He was a mile back early and halfway through the race I thought Kent was nuts for being sixteen lengths back. Shows you why I’m not a jockey, cause he came flying on the far turn and grabbed the lead turning for home and blew the doors off his competition. To me it was the only real wow moment of the three prep races run this weekend. Mor Spirit ran a typical Mor Spirit race, somewhat plodding home strongly to finish up in second. I’ve been on the Mor Spirit train for a while now thinking he would improve and become a big Kentucky Derby contender, but I think it’s time for me to jump off that train. The other big story from Santa Anita Derby Day was Songbird once again destroying her rivals. Each time she runs I say “eh who did she beat though?” and every time I look like a jerk because she buries her competition. I still maintain someone will beat her in the Kentucky Oaks but my denial of her greatness is starting to get embarrassing. I figure when she’s 5 in front in the BC Distaff this October I’ll finally give in and say she’s just never gonna lose. But until then I remain a contrarian.

A wet and wild Wood was contested on Saturday as Outwork did just that and beat Trojan Nation to give his sire Uncle Mo another Grade 1 winning progeny. This has been the season of the “can Uncle Mo kids get the 10 furlongs.” Well they sure as heck can get 9. I have a lot of respect for pedigree handicappers but at this point I honestly don’t care what there father could or couldn’t do. My dad had no musical ability at all and yet I sing like a bird (Here’s an example of that) so just cause Uncle Mo was a really fast sprinter (he also won at two turns) doesn’t mean his kids can’t move beyond 9 furlongs. Overall though this race was I think the weakest of the three preps in some ways. Outwork was all out to beat a maiden in Trojan Nation and the final time came back as the slowest Wood Memorial ever. Now I know time carries many factors, but this was not a swift group. 3. Bluegrass Stakes Day

The Bluegrass featured your favorite Derby bound maiden and mine Laoban, doing what he does up on the lead. I still have great visions of trainer Eric Guillot at the Kentucky Derby in a jogging suit like Pauly Walnuts would wear, cheering home Laoban who is on the lead through a half mile in 44.95 seconds. Hopefully Laoban can get in cause his 4th place finish in the Bluegrass left him in 21st position with the Arkansas Derby still ahead of us. But there are always some defections in the next couple weeks, so hopefully he will get in. Brody’s Cause was a strong winner of this race but to me it seemed like a race that collapsed a little bit. The top 3 finishers were 10th, 14th, and 11th early on and all came flying to pass Laoban, a maiden, down the stretch. My Man Sam was the most impressive in my book as he’s still very lightly raced and was 7 wide turning for home and still flew to get up for a good second place showing, which points wise would put him into the Kentucky Derby if his connections want to go. Zulu was the clunker, but after Mohaymen’s Florida Derby I’m surprised people were as bullish on him betting him to 2/1 favoritism. As for Brody’s Cause, it’s a nice horse for trainer Dale Romans who we all know really wants to get a Derby win before beginning his Hong Kong career folks have been talking so much about lately.
RacingBARN
Loading...