Although all eyes will be on American Pharoah at Belmont Park on Saturday, the best race to bet for horseplayers might be the G1 Met Mile. Bayern, Tonalist, Wicked Strong and Honor Code have all signed up for the Metropolitan. The horse that could throw a wrench into the favorites' plans is at 20/1 on the morning line.

10-Kobe's Back, 20/1 - Honor Code figures to be the closer that gets all of the attention, but since changing barns to Peter Miller, Kobe's Back has been downright terrific. 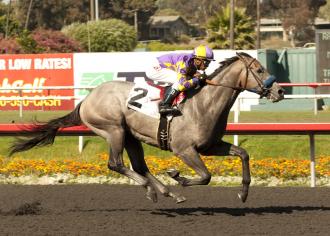 He barely lost to Wild Dude after chasing a slow pace in the G2 San Carlos at 7 furlongs over Santa Anita's super fast track in his first race for Miller. In his second race for Miller, Kobe's Back won the G3 Commonwealth. Jockey Gary Stevens rides and Miller wins 22% with his shippers. Kobe's Back just looks like a different horse under Miller's care. Even though he's never raced at the mile distance, he's the pick to beat his more heralded opponents in the Met Mile.

4-Tonalist, 5/2 - It's tough to leave Bayern out of the Top 3, but he faces Private Zone to his inside as well as Bay of Plenty.

Bayern's going to have to work hard to take these gate to wire at a mile. The race actually sets up for the morning line chalk, Tonalist, who should get the perfect trip behind the front runners. Tonalist will grab the lead in the stretch with only Kobe's Back and Honor Code pursuing him to the wire. My guess is last year's Belmont winner holds on for second while Kobe's Back nips him for the win.

9-Honor Code, 6/1 - Honor Code's best races seem to be at a mile. Closing at longer distances than a mile is tough to do when the pace is soft and a :48

half means that the pace was soft in the G2 Alysheba on Derby Day when Honor Code finished fifth by 6 lengths after going off as the $1.80 to $1 favorite. He could make amends in this if the pace is quick enough for him to close into. The only issue I see between Honor Code and Kobe's Back is that Kobe's Back is well-rested while Honor Code just ran on May 1. Usually, that wouldn't be an issue, but Honor Code hasn't had many races this close together during his career.