I'm looking elsewhere for the winner. Heck, I don't even have Justify in my Top 3. Check out whom I like to win, place, show, and finish fourth in the June 9 Belmont Stakes.

I don't adhere to the argument that Bob Baffert entered Restoring Hope to serve as Justify's rabbit. First, Restoring Hope is a stalker, not a front runner. Second, Justify should be much faster early than Restoring Hope will be. It's also doubtful that Baffert would enter a Mary and Gary West owned thoroughbred into a race without trying to win it.

What makes Restoring Hope a great play (to me at least!) to win the 2018 Belmont Stakes? Several reasons. His sire, Giant's Causeway, is one of the very best in the world. His broodmare, Symbol Freedom, lists Tapit as her sire. There's also the fact that Baffert's top 3-year-old in the past couple of years have been late bloomers:  Arrogate and West Coast.

Sure, Restoring Hope might not be as good as Arrogate or West Coast. But, let's be honest, Arrogate wasn't Arrogate until he became Arrogate when winning the Travers Stakes at 11 to 1.

I believe there's a lot going in the right direction for Restoring Hope. Fantastic works leading up to the Belmont gives me confidence he's sitting on a huge race.

The last two Belmont Stakes winners had something huge in common. Both had been sired by Tapit. Hofburg is the only horse in the 2018 Belmont Stakes to have been sired by Tapit. That's a big plus. Another big plus is that he found himself in all sorts of trouble in the Kentucky Derby, but didn't give up. He kept fighting
on to finish 7th after an incredibly brutal trip.

Trainer Bill Mott doesn't rush his horses. If he believes Hofburg can win the Belmont Stakes, who am I to argue? I think he's the most logical contender in the field, even more logical than Justify. But, his odds won't be at an overlay price at all. In fact, don't be surprised if he offers 3/1 odds on race day. I'm hoping he comes up just short to Restoring Hope.

Todd Pletcher is no stranger to the Belmont Stakes winner's circle. 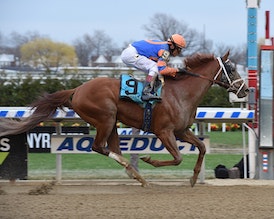 Pletcher has won 3 Belmont Stakes:  Rags to Riches in 2007, Palace Malice in 2013, and with Tapwrit last year. Todd knows how to get horses ready to win the Test of Champions.

I've already written why I'm not a fan of Justify to win the Belmont Stakes. To add a bit more color, I

think he's a tired horse. He beat his competition in the Preakness Stakes on sheer will. That could work in a 1 3/16 mile race. That won't work in a 1 1/2 mile race.

The Belmont will be Justify's sixth race in his career and it will happen since February 18. That's a lot of running for a young horse. I think he runs well. I don't believe he's fresh enough to get into the Top 3.