The 2018 Belmont Stakes takes place this Saturday on June 9. Justify has a chance to win the Belmont Stakes and become the thirteenth Triple Crown winner. Justify is such a huge favorite that his future betting odds are at around 4/5.

In 1958, Tim Tam had won both the Kentucky Derby and the Preakness. He entered the Belmont as a less than even money favorite to win the Test of Champions. Cavan exploded in the stretch and beat Tim Tam by 6 lengths. Tim Tam ran well in defeat. He was over 5 lengths ahead of the third place horse. But, the son of the great Tom Fool couldn't close the deal on a Triple Crown victory.

Bob Baffert's first Triple Crown try was in 1997 with Silver Charm. Charm earned his way to his Belmont Stakes Triple Crown bid. He beat Captain Bodgit, Free House, and Pulpit in one of the deepest Kentucky Derbies, maybe, in history. Then, he beat Bodgit and Free House in a 3 horse photo in the Preakness Stakes.

Who beat Silver Charm to end Baffert's first Triple Crown chance? A horse that hadn't run in the Derby and that had finished fourth behind Charm, Free House and Bodgit in the Preakness, Touch Gold. Silver Charm didn't see Touch Gold. He thought he had the race won.

Bob Baffert returned to New York in 1998 with Derby and Preakness winner Real Quiet. Real Quiet had the Belmont Stakes. He had it. The thing that stopped him was Victory Gallop getting his nose down at the wire before Real Quiet did. Just a nose. 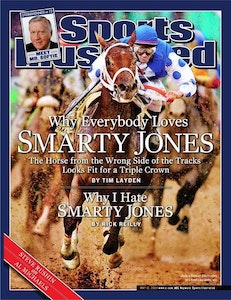 Stakes. He, like Real Quiet, had the Test of Champions won. It turned out that Birdstone was just slightly better at 1 1/2 miles than Smarty Jones. Even if Stewart Elliott had waited to move Smarty, would have mattered? Maybe. Maybe, not.

The 5 Belmont losers above prove one thing:  there's a reason only 11 horses have won the Triple Crown in 99 years of running all 3 Triple Crown races. It's not easy to win the Crown.

If Justify wins the Triple Crown, like American Pharoah he will have earned it. The Belmont Stakes will be Justify's sixth race since February 18. That's a lot for non 3-year-olds who won't have win a race at 1 1/2 miles. History shows that winning the Belmont isn't easy.

If Justify wins on Saturday, he'll prove that he's one of the best 3-year-olds to ever run.