That’s sort of crazy because even though Shared Belief was cruising, the horse still hasn’t won at a 1 ¼ miles over dirt. His Pacific Classic victory was run over polytrack. Yes, Bayern bumping him right out of the gate in the Breeders’ Cup Classic may have cost him the race, but super horses get over those types of issues, right? And, forgive me, but only super horses deserve to be odds on favorites in Grade 1 races.

As good as Shared Belief looked in the San Antonio, he’s only beaten three horses of note. First, he had to really work hard to beat Conquest Two Step in the Malibu. Conquest Two Step has turned into a seriously talented horse, no doubt, but Conquest Two Step is a late closing sprinter. He’s not a route runner and the Malibu is run at 7 furlongs. Second, Shared Belief beat California Chrome. Chrome is awesome, but does beating California Chrome designate Shared Belief as a solid 3-5, possibly 1-5, choice in the Santa Anita Handicap? The third horse of note, from my opinion, that Shared Belief beat was Toast of New York in the Grade 1 Pacific Classic this past August. Toast of New York will run in the Dubai World Cup in the next couple of weeks.

Toast of New York would have been the pick to upset Shared Belief if he was running in this, but he’s not. Instead, I’m going to lay down the case for three horses that I think have a great shot at taking down the best horse in the world on Saturday. Do I think that any of the three will actually beat Shared Belief?  I’m not so sure. The Rome runner is the best horse that I’ve seen hit the track so far this year, but odds of 1-5, 1 to 2 -5 require me, as a horseplayer, to look elsewhere for the winner. 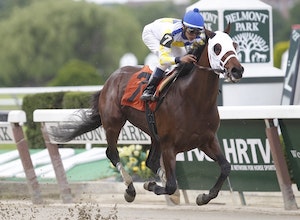 Moreno (6/1) Moreno had no shot in the Breeders' Cup Classic because of the start, and he clipped heels in the Jockey Club Gold Cup. If you throw those two races out, he’s got as legitimate of a shot to beat Shared Belief as any of them in here. His races at Saratoga during the summer were fantastic.

It will be interesting to see Moreno’s off odds since on paper it doesn’t look like anybody is going to be close to this guy in the early stages. Sure, you have to question whether or not he has the ability to get the distance since the two times he has run at 1 ¼ miles, he’s failed miserably, but Santa Anita can be awfully fast on Big Cap Day.

My dad taught me that lone speed is lone speed and Moreno, at least on paper, looks like lone speed. If Moreno can get the distance, don’t be surprised if he upsets the chalk. I’m leaning this way.

Richard Mandella trains this horse. I believe that anything Papa Mandella puts onto the race track has to be considered live. More importantly, this horse has that Gentleman, Siphon, Sandpit look about him.

Catch a Flight won by only a neck in an optional claimer in his last, but Mandella has put two works into him since then and Gary Stevens remains aboard. This will be Catch a Flight’s third race state side. He should improve and the breeding suggests that the Mandella runner can easily handle 1 ¼ miles. Plus, Stevens might have a tactical edge in this since he’ll be closer to Moreno than any other horse in the race, including Shared Belief. Gary understands pace as well as any jockey to ever live. He won’t let Moreno be more than 2 lengths ahead of him.

Why would John Sadler, who is an extremely capable trainer, enter Hard Aces into the Big Cap when there are so many other great opportunities? Hard Aces goes first time for Sadler. His last race, a victory in a $75K Louisiana Stakes race at 1 1/16 miles, was nice but in no way is comparable to what Shared Belief, or Moreno, or even Imperative or Dynamic Sky, has done. It doesn’t come close. Yet, here he is, entered in the Big Cap.

Sadler puts Victor Espinoza on his back and Hard Aces has the breeding, being out of Hard Spun and Quiet American mare All in With Aces, to get the 1 ¼ mile distance. The big question is his class and whether or not Victor can make a trip after breaking from post-position 13. Still, if Sadler thinks he’s got a shot, who am I to judge? Improving horses off of Larry Jones, who had been training Hard Aces, isn’t easy to do, but Sadler must think he’s done it.

Again, I’m not suggesting that any horse entered in the Big Cap on Saturday will actually beat Shared Belief. But, what I am suggesting is that horseplayers think twice about backing the Jim Rome part-owned, Jerry Hollendorfer trained and Mike Smith ridden superstar to win the Big Cap at less than fair odds. That’s the one golden rule in horse racing. A horseplayer should never ever bet on underlays to win. This is especially true when it comes to Grade 1 races. I’ll likely put a few dollars on both Catch a Flight and Moreno to win while using Hard Aces, along with Shared Belief, in my exotic wagers.