Ruidoso Downs will host a pair of million dollar stakes this weekend when they host the $1,224,488 Rainbow Derby and the $1 million Rainbow Futurity.

The 440 yard Derby runs on Saturday afternoon with fastest qualifier Valiant Rogue and First Valiant Sign likely to be the two betting favorites in the ten-horse final.  Trainer Mike Joiner will saddle First Valiant Sign, who was a standout juvenile last year winning the $750,000 Ruidoso Futurity (G1). The son of Valiant Hero ran second in the Grade 1, $1 million Rainbow Futurity and capped his summer running fourth in the $3 million All American Futurity, also a Grade 1 stakes. Cody Jensen will ride First Valiant Sign, who posted the fourth-fastest qualifying time in 14 trials three weeks ago.

His toughest test will come from fastest qualifier Valiant Rogue, who blazed to victory in his trial in :21.705, defeating Boxwineizfine in one of the earlier trials on the day. Also sired by Valiant Hero, Valiant Rogue is trained by Judd Kearl and will be ridden in Saturday's final by jockey Tanner Thedford.  He did not have the same success in his 2-year-old campaign, but has won his last two starts this season at Ruidoso Downs. 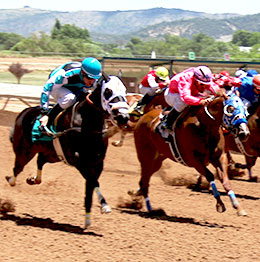 The talented filly Boxwineizfine, ran fourth in the $160,000 West Texas Derby in March at Sunland Park. She will break from post position ten under rider Sergio Becerra, Jr.

Jockey Cody Jensen was aboard five Rainbow Futurity qualifiers in the trials, including all four trained by Mike Joiner. He opted to pilot A Revenant, a son of Mr Jess Perry, who will break from the far outside post in Sunday's 400-yard final.

One of four horses trainer Mike Joiner qualified for the Rainbow Futurity, A Revenant made his debut during the first day of trials to the Grade 1, $1 million Ruidoso Futurity. He was clocked in :17.748 for 350 yards was the second-fastest qualifying time on the first of two days of trials. Joiner will also saddle One Famous Beau, Ultimate Return and Drinkin Class.  He won this AQHA prestigious race in 2012 with Carters Cookie.