Serious and novice standardbred racing fans alike will be keenly watching the Saturday card at the Meadowlands as the New Jersey mile oval will play host to 13 Breeders Crown eliminations and nothing else on a stellar card that will set the stage for next weekend's two nights of Breeders Crown finals.

Saturday's opening race is the $20,000 Breeders Crown elimination for two-year-old colt & gelding trotters, with the top five juveniles from this event advancing to next week's lucrative final. Not only will a handsome pot be in store for the winner, but the victor will also have the inside track to divisional honors and potentially early bragging rights in regard to next year's Hambletonian chase.

Saturday's opener features several solid freshman trotting colts, several of which are among the serious contenders for divisional honors. Devious Man (Andy Miller), a Maryland-bred son of Credit Winner trained by Julie Miller, has won seven of 11 starts and banked over $300,000 this season, including a victory in the $225,000 New York Sire Stakes final at Yonkers Raceway last month and a neck score in the $56,000 International Stallion Stakes at Lexington in 1:53.2.

But three spots to his outside is Walner (Tim Tetrick), another prominent trotter in the NYSS events who has won four of five starts and banked nearly $80,000 for trainer Linda Toscano. This Chapter Seven colt won an International Stallion Stakes split at Lexington in 1:51.3 on the same day Devious Man scored nearly two seconds slower, so he is likely to garner the favorite's role. Southwind Cobra (Yannick Gingras) and New Jersey Viking (Ake Svandstedt) were one-two in their Int Stallion Stakes event at Lexington last out and should also earn a spot in the final.

Then one race later in the first $20,000 Breeders Crown elimination for two-year-old colt pacers, much of the attention will be focused on Huntsville (Tetrick), who sports a 5-3-0 slate and nearly $300,000 banked for trainer Ray Schnittker. A son of Somebeachsomewhere, Huntsville has won four straight races, including the Pennsylvania Sire Stakes final at Harrah's Philadelphia, the Bluegrass and the Int Stallion Stakes at Lexington in 1:49. Despite drawing post eight, Huntsville will be the odds-on choice in this spot.

Looking to upend the budding freshman star are Miso Fast (Matt Kakaley), Ocean Colony (Gingras), Odds On Delray (Scott Zeron) and McThriller (Brian Sears). Odds On Delray was second as the 2-5 favorite in his Int Stallion Stakes division at Lexington in 1:49.2 and merits solid consideration based on that effort and his 3-3-2 slate and $95,000 bankroll from 10 starts this year for trainer Tony Alagna.

One race later in the $20,000 Breeders Crown elimination for three-year-old filly pacers, Pure Country (Brett Miller) looms the tepid choice here for Takter, owning an 8-4-3 slate and $960,000 banked from 18 starts this year, including a recent 1:48.2 score at Lexington. But she is surrounded by talented foes, including Call Me Queen Be (Zeron), who was second to Pure Country at Lexington, Darlinonthebeach (David Miller), who boasts 10 wins in 18 starts and earnings of $615,000 this year for trainer Nancy Johansson, and L A Delight (John Campbell), who is riding a three-race win streak for trainer Bob McIntosh including a tally in the Jugette. 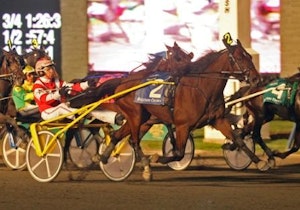 Then one race later in the $20,000 Breeders Crown elimination for freshman filly pacers, much of the focus will be on three talented freshmen. Agent Q (David Miller) owns a 3-5-0 slate and nearly $300,000 banked for trainer Aaron Lambert, Roaring To Go (Brett Miller) has won six of 12 starts and banked over $240,000 and sports a 1:50.4 mark at Lexington for trainer Kevin Lare and owner Frank Chick, whule Idyllic Beach (Gingras) sports a 7-3-0 slate and $500,000 banked for Takter.

One race later in the $25,000 Breeders Crown elimination for three-year-old filly trotters, All The Time (Gingras) All The Time will be looking to put the finishing touches on a solid season in which she won the Hambletonian Oaks for Takter. But other contenders include Side Bet Hanover (Corey Callahan), Spicedbourbongirl (Jeff Gregory), Caprice Hill (Tetrick) and Non Stick (Svandstedt). Caprice Hill is the main threat to the favorite, although major stakes scores have eluded her this season.

Then one race later in the first of two $25,000 Breeders Crown eliminations for three-year-old colt pacers, Racing Hill (Brett Miller) looms as the odds-on choice from the rail for Alagna, sporting a 6-5-2 slate and $1.3 million bankroll from 13 starts this year. Stablemate Dr J Hanover (Zeron) has won seven of 13 outings, while Boston Red Rocks (Tetrick) is looking to garner his second Crown title for trainer Steve Elliott.

But one race later in the $25,000 Breeders Crown elimination for three-year-old colt trotters, all of the attention will clearly be focused on Marion Marauder (Zeron). Fresh off his determined, narrow victory in the Kentucky Futurity, which gave him the Triple Crown sweep for trainer Paula Wellwood, Marion Marauder has already secured divisional honors and likely trotter of the year and he is among the serious contenders for horse of the year along with sophomore pacing star Betting Line and older pacers Wiggle It Jiggleit and Always B Miki, who will meet again next weekend in their respective Breeders Crown final.

But looking to foil Marion Marauder's bid for Breeders Crown glory and perhaps end his horse of the year chances is Southwind Frank (Gingras), last year's champion trotting colt who owns a 6-5-0 slate and $1 million banked from 12 starts this year. This Ron Burke trainee can hardly be described as a disappointment this season, however, since Marion Marauder has just ascended to the head of the class.

Then one race later in the second $20,000 Breeders Crown elimination for two-year-old pacing fillies, much of the attention will be on Someomensomewhere, a daughter of Somebeachsomewhere who owns a modest 2-4-1 slate and $100,000 bankroll from trainer Erv Miller. Her main rivals in this elim include Rockette (Kakaley), Blameitonthenight (Gingras) and Tori Hanover (Zeron). Blameitonthenight has won three of 10 starts and earned just over $100,000 but rates second best in the weaker of the two divisions.

One race later the second $20,000 Breeders Crown elim for freshman trotting colts and geldings also came up much lighter than the first. Bill's Man (Callahan) gets the nod based on his 2-3-2 slate and $70,000 bankroll from 11 tries, while Fly On (Andy Miller), Jake (Sylvain Filion) and Snowstorm Hanover (Kakaley) have displayed plenty of ability.

Then one race later in the second $25,000 Breeders Crown elim for three-year-old filly trotters, Broadway Donna (David Miller) clearly rates the favorite despite drawing post 10. The daughter of Donato Hanover trained by Jim Campbell for owner-breeder Fashion Farms has won five of 10 starts and banked over $400,000 this year, including recent scores in 1:51.1 and 1:51.2, respectively, at Lexington.

One race later in the second $25,000 Breeders Crown elim for three-year-old colt trotters, Bar Hopping (Tetrick) clearly looms as the odds-on favorite from post six. This Muscle Hill colt trained by Takter owns a 6-2-4 slate and $800,000 bankroll from 15 starts this year, including a 1:52.3 score in the Bluegrass at Lexington, a sharp score in the Canadian Trotting Derby in which he defeated Marion Marauder and an easy victory in his Hambo elim.

Then in the next race on the card, railbound Betting Line (David Miller) will look to maintain his winning ways when he headlines the second $25,000 Breeders Crown elim for three-year-old colt pacers. This Bettor's Delight colt trained by Casie Coleman has already secured divisional honors, but he may need to prevail in next week's Breeders Crown final to garner pacer of the year and horse of the year honors. After finishing second in his seasonal debut, Betting Line has won 14 straight races, including the Milstein and the Little Brown Jug.

One race later in the penulatimate race on the card, Blue Moon Stride (Andrew McCarthy) and Newborn Sassy (Tetrick) will vie for favoritism in the Breeders Crown elim for three-year-old filly pacers, while Downbytheseaside (David Miller) will rule the solid choice in the finale, the second $20,000 Breeders Crown elim for two-year-old colt pacers. This Brian Brown trainee sports a 6-2-2 slate and $240,000 bankroll from 10 starts including a 1:49 score at Lexington last out.
Racing
Loading...