Since 1984 the year-end rallying cry among harness racing enthusiasts has been "It All Comes Down to the Breeders Crown" and this Friday and Saturday night the Meadowlands will host numerous Breeders Crown elims as the various trotters and pacers look to secure divisional honors that typically awaits the Crown winners.

Friday's second race in the $20,000 Breeders Crown elimination for the two-year-old trotting fillies and this race features a genuine standout who has already likely secured year-end honors. Ariana G (Yannick Gingras) has won eight of nine starts and banked nearly $440,000 this season for trainer Jimmy Takter and appears to be a cinch for divisional honors regardless of her performance this weekend and next.

If Ariana G performs as expected this weekend then the last four spots for the lucrative final next week could get divided among Broadway Idole (Scott Zeron), Magic Presto (Brian Sears), Temple Ruins (Matt Kakaley), Chezatter (David Miller) and Princess Aurora (Tim Tetrick). Magic Presto, Temple Ruins and Chezatter have each recorded three wins and banked over $125,000 this year, while Broadway Idole has earned $130,000 despite just one win from 10 starts and Princess Aurora owns a 3-2-1 slate and $75,000 banked from just eight outings. 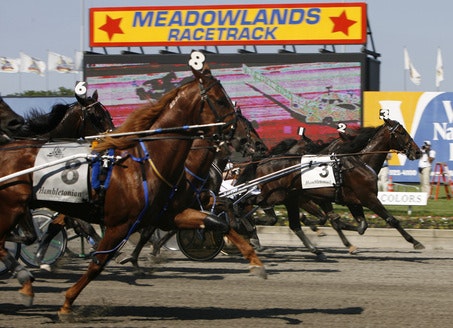 Two races later in the other Breeders Crown elim for two-year-old trotting fillies, Thats All Moni (Tetrick) looms the solid choice for Takter sporting a 4-3-2 slate and $210,000 bankroll from nine starts this year. But the daughter of Cantab Hall is hardly a cinch to succeed against the likes of Trviso (Charlie Norris), Ice Attraction (Ake Svandstedt), Feed Your Head (Gingras) and Hillarmbro (Trond Smedshammer). Five of these freshmen fillies will advance to next week's final where they will be vying for minor spoils if Ariana G stays flat.

Then two races later the Meadowlands will offer a $25,000 Open for older pacers looking to prep for the $400,000 Breeders Crown final. Not all 10 horses in the Open will be heading for the Breeders Crown Aged Pace.

Despite drawing post 10 on the far outside, Always B Miki (David Miller) looms the odds-on choice in this event for Takter. The five-year-old son of Always A Virgin has won nine of 15 starts this year and banked nearly $1.1 million, highlighted by a 1:46 victory at the Red Mile in Lexington, the fastest mile in harness racing history. Always B Miki also owns three wins in 1:47 this season and he has upended Wiggle It Jiggliet - supplemented to the Breeders Crown at a sum of $50,000 - on several occasions.

Looking to upend Always B Miki in this contentious affair are Bettor's Edge (Gingras), Art History (Zeron), Americanprimetime (Jim Marohn, Jr.), Artistic Major (John Campbell), Dealt A Winner (Andy Miller), Mach It So (Tetrick), Luck Be Withyou (Brett Miller), Split The House (Andrew McCarthy) and Bushwacker (Corey Callahan). Mach It So sports a 7-4-0 slate and $248,000 bankroll from 22 starts this year and was recently second to Wiggle It Jiggleit in the $150,000 Bobby Quillen Memorial at Harrington.

Then one race later in the first of two eliminations for the Breeders Crown Fillies & Mares Open. Solar Sister (Doug McNair) is the slight choice based on her 4-4-4 slate and $346,000 bankroll from 14 starts this year, but she will have her hands full against the likes of Katie Said (Zeron), Yagonnakissmeornot (Daniel Dube), Frost Damage Blues (Brett Miller), Divine Caroline (Tetrick) and Sassa Hanover (Gingras).

Then four races later in the other elim for the Breeders Crown F-M Open, Lady Shadow (Gingras) will look to put the finishing touches on a stellar campaign that will likely earn her the divisional honors as well as the Maryland-bred horse of the year title. But several solid foes will look to upend her in this spot and again next week, including Devil Child (Brett Miller), the reigning Maryland-bred horse of the year, Venus Delight (Tetrick), Bedroomconfessions (Zeron) and Regil Elektra (Joe Bongiorno).
Racing
Loading...