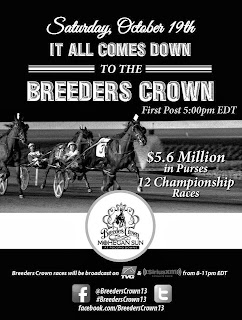 The Breeders Crown for 2013 takes place on the single program at Pocono Downs this Saturday, Oct. 19. We will once again be on site for the events, offering tweets @FrankCotolo , @HarnessRaycer with extended coverage. Follow us for some major late-breaking wagering opportunities, as well as exclusive insider comments.

This week’s blog, like last week’s blog, splits into two volumes. We cover, below, the two- and three-year-old events. At the Breeders Crown Countdown blog, we cover the finals for the older divisions. Our horses-to-watch list (H2W) returns next week.

The finals’ fields include the top finishers from the elims and the byes, making for competitive races, though four of them include arguable locks.

One of this year’s three best horses has been Father Patrick. We have sung his praises through the season and he has not let us down. In the elim we nabbed him with Nuncio for an exacta, having faith in the latter’s return after a rest. Father Patrick made up a lot of ground to win but it’s the kind of horse he has been all season in this division. Don Dorado, here with rest, comes in on a bye and should be wailing. Nuncio could be in the mix again.

Two-year-old Filly Pace
Gallie Bythe Beach won an elim but her connections scratched her, disliking how she came out of the mile. So, Precocious Beauty, beaten a neck last week and getting post 8, may be a decent price, especially with She’s Da Bomb, though also an elim loser, and Allstar Rating, the other elim winner, drawing inside of her. If those three cancel each another out with duels and shuffling, which is a good possibility, Uffizi Hanover could be the upset performer.

Two-year-old Filly Trot
Cooler Schooner appears to be a step or two better than her main rival, Shake It Cerry, but that is impossible to prove. Ultimately, the filly that can topple them both, especially if they speed it up midway to get control, is Lifetime Pursuit. A spoiler for the exacta may be Demanding Sam, who was strong late against “Cooler” in a deceiving close (because “Cooler” won by over 10 lengths). “Cerry” could be off the board.

Three-year-old Filly Pace
This division went sans elims but what does that matter when I Luv The Nitelife shows up to race? She is the second of four outstanding division leaders and should cap her soph season tonight with a blaze of glory. There will be action on Shebestingin and Somwherovrarainbow but it is most difficult to see them beating “Nitelife.” In fact, while you are keying Nitelife in exotics, don’t leave out Parlee Beach, who could pull another great second as she did in Delaware, at a big price.

Two-year-old Colt Pace
This is a tough field with a lot of cases for many to win. So Surreal closed very well in his elim and may be a big overlay compared to Somestarsomewhere and Luck Be Withyou, last week’s steamers. Also a probable outsider with a decent chance of being in the mix is Three Of Clubs. He will be under-rated, especially from post 8, but is coming around to a strong peak at the right time.

The next standout, unbeaten in her division and the filly many thought could have beaten the boys in the Hambo, is Bee A Magician. Readers of this blog heard the name first here, last year, when we forecast the daughter of Kadabra to be a giant. She has exceeded our expectations and could be the best around since CR Kay Suzie. Royal Assets scratched, bringing Southwind Cocoa into the field but that is a small asterisk. Chances are Coffeecake Hanover or Ma Chere Hall sit behind “Bee” and there is the exacta. 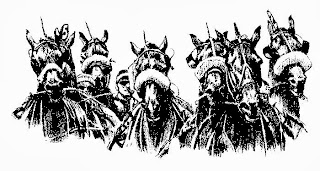 Rarely at this time in the season can a harness writer be at a loss for superlatives when it comes to any horse but the well of accolades has been emptied when it comes to Captaintreacherous. It’s amazing that the track handicapper’s morning line makes him a 5-2 favorite. Those odds are madness; they represents a 29-percent chance to win for one of the greatest pacers to set foot on a racetrack in modern times. We should only be so lucky to get such a wager. For an exacta price look at Apprentice Hanover, who can sneak in there while the other public choices try again to thwart Captaintreacherous’ trip. Beach Memories could hoist the price of a trifecta. Horses in exotics with “Captain” have tended to be outsiders, the ones standing after the better ones lose their breaths.

We think Royalty For Life will race far better than he did in the elim, where he finished fourth while maintaining a tiresome outside trip. No doubt he will be sent strongly this time and when he is able to take command he will do what he has done to these same horses almost repeatedly through the season. He may be a better price than ever, though, because the crowd is fickle and because he has not totally dominated the division and because All Laid Out is the “now” horse. We like to think that means he loses now. Use Deadliest Catch in exotics, as well as EL Rocket to boost your prices.

Ray Cotolo contributed to this edition.