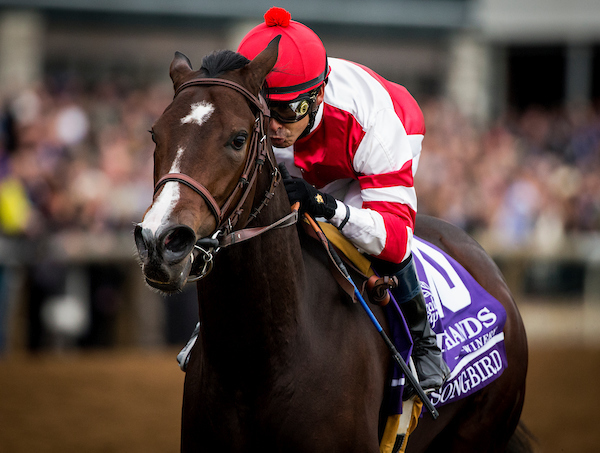 1st Choice: #5 SWEET LORETTA (6-1) – She comes into this race off an 8-week layoff, but she proved her mettle in winning the Spinaway in a dead-heat in her most recent start, well clear of the rest. The other two wins which comprise her undefeated record came in runaway wins. She sports a regal pedigree, from the family of juvenile Grade 1 victress Spring In The Air; that pedigree brought a top bid of $750k when she was just a weanling. If she’s able to stretch out successfully – and there’s nothing in her pedigee to suggest she won’t – she could be establish herself as the leader of the class in this race.

2nd Choice: #2 WITH HONORS (10-1) – Like the top choice, she also boasts a nice, precocious-type pedigree. Her second dam – Dreaming of Anna – won this race ten years ago en route to championship honors. And like that champion, With Honors has shown ability on both surfaces; she owns a pair of wins over the grass before an ample second-place effort in her main-track debut last out in the local prep for this race. She enters this event off a bullet work, and could post a top effort at very nice odds.

3rd Choice: #11 DADDYS LIL DARLING (12-1) – She couldn’t have been much further back last out in the Alcibiades, rallying from 12th place early to finish second, beaten just a length in the full field of 14. While she’s failed to post flashy speed figures to date, the ability she’s shown to navigate from well behind in full fields is impressive –and reminiscent of her brother Mongolian Saturday, who will look to defend his Breeders’ Cup crown on Saturday. She’s posted a nice work over this strip in advance of this effort, and could offer significant value given her 12-1 morning line odds.

4th Choice: #12 AMERICAN GAL (6-1) – Her two wins to date have been very flashy, as are the speed figures she has posted. The two bullet works she’s posted in preparation for this also hint at her talent. And her trainer certainly knows how to win with juveniles, and this race in particular (this would be his third). All that aside, the post-position draw was decidedly unkind, as she’ll break from the far outside with a short run to the turn – not great for a filly with lots of speed; she’ll have to try to clear the field. There are also questions about her pedigree in relation to her ability to stretch out, as her dam’s side is speed heavy and stamina light.

Who won the 2015 BC Juvenile Fillies?

The Juvenile Fillies was the 4th win for the undefeated Songbird, whose win streak has since extended to 11.

What is the most wins by the same trainer in the BC Juvenile Fillies?

How many jockeys have won the Juvenile Fillies more than once?

How many times has a filly won the BC Juvenile Fillies via a disqualification?