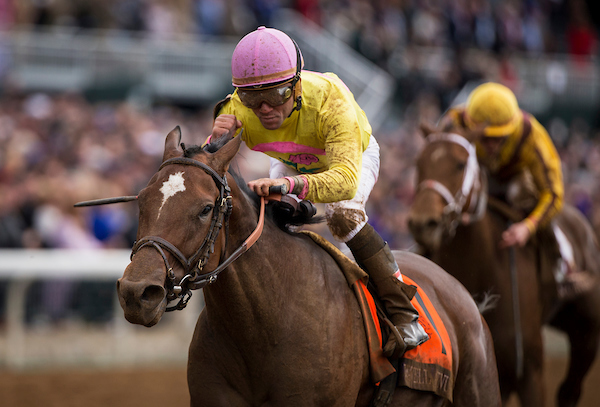 1st Choice: #7 GLORYZAPPER (15-1) – Dismissed as a 15-1 shot on the morning line, this filly was also dismissed as a yearling when she passed through the Keeneland September sale for just $15k. But she’s been no worse than second from seven starts over the main track, and she appears to be peaking at a good time as she notched her first graded stakes score last out in the local prep for this race. She catches what must be considered the weakest field ever assembled for this Filly & Mare Sprint and could have signaled the upset with a salty final workout in preparation for this effort.

2nd Choice: #9 PAULASSILVERLINING (10-1) – Like the top choice, she’s a 4-year-old Ghostzapper filly coming into this race off a nice score versus graded company. Unlike the top choice, she’s done her work on the east coast, and now makes her first start west of the Mississippi. She rarely puts in a dull effort and at times has flashed brilliance, including runaway graded stakes wins earlier in the year. If she’s able to run up to par in new surroundings, she figures to be in the mix at the end.

3rd Choice: #3 TARA’S TANGO (8-1) – She was annihilated in her most recent effort, but that came at the hands of Stellar Wind and Beholder – two of the top choices for the Distaff. She has pressed a hot pace in that race, but was unable to go the distance. She won’t have to go the distance her as she reverts back to a sprint distance, which she ran at two back when winning a top race at Del Mar. She is a graded stakes winner over this surface, and could add to a nice exotics payoff while facing an underwhelming field.

4th Choice: #8 CARINA MIA (7/2) – Like Tara’s Tango, she ran into a buzzsaw last out when finishing second to undefeated Songbird in the Cotillion. I suspect she’ll greatly relish the return to a one turn distance of ground, but she’s unproven against top level fillies at this distance. While she’s undeniably talented, there are too many questions about this probable favorite to put her on the top of the ticket with any level of confidence.

Wavell Avenue was a 10-1 longshot who defeated Cavorting, Judy and Beauty, and more by nearly two lengths in 2015.

Which horse has won this race twice?

Groupie Doll won the race in 2012 and 2013 and was awarded Champion Female Sprinter both years.

What was the original distance of the Filly & Mare Sprint?

When the race was first added in 2007, it was an ungraded event and was contested at 6 furlongs.

Which jockey has won the race multiple times?

Rajiv Maragh was Groupie Doll’s jockey, leading to the only consecutive wins for a jockey in the Filly & Mare Sprint.