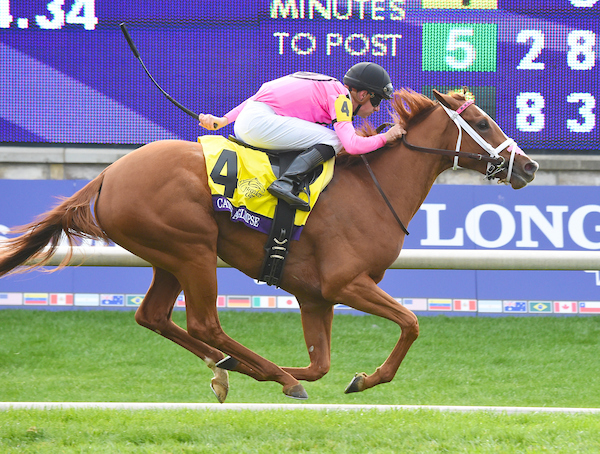 1st Choice: #5 Victory to Victory (12-1) Victory to Victory hopes to live up to her name and parlay her most recent win in the Grade 1 Natalma into another victory here. The 2 ½ length win earned her the best speed figure in the field and the mile on the turf was an excellent prep for this weekend’s event. Victory to Victory is out of multiple stakes winner and 2009 Canadian Champion Turf Female Points of Grace.

2nd Choice: #1 Hydrangea (6-1) Unlike most of the other shippers from across the pond in this race, Hydrangea has actually attempted the mile distance and placed second in a Group 1 event. Trainer Aidan O’Brien is always a threat in these races, as the Galileo filly gets Lasix for the first time and makes her stateside debut. Hydrangea usually sits on or very near the lead, so her draw on the rail will help her control where she wants to sit against this field.

3rd Choice: #14 La Colonel (9-2) Of the two horses that trainer Mark Casse brings to this race, La Colonel will come with more hype and lower odds, which she more than deserves after winning the Grade 3 Jessamine at Keeneland by over 4 months. Geroux opted for La Colonel over Victory to Victory, who now gets La Colonel’s former jockey, Leparoux. Disregard this filly’s first two races; she was bred to run long on the grass and is excelling at it.

4th Choice: #13 Roly Poly (4-1) Roly Poly has been no worse than second in her last four starts, and before that she was an also-ran to the untouchable Lady Aurelia. This War Front filly has more experience than anyone in the field with 7 starts, all sprints. Roly Poly is another strong entry from the O’Brien barn, but faces the challenges of a US debut, extended 2YO campaign, route, and an outside post.

Who won the 2015 BC Juvenile Fillies Turf?

Catch a Glimpse’s victory was part of an 8-race win streak from 2015 and 2016. She was named Horse of the Year in Canada.

Which winner of the BC Juvenile Fillies Turf returned to win another BC race?

The winner of the 2011 Juvenile Fillies Turf, Stephanie’s Kitten, returned to win the Filly and Mare Turf in 2015.

Who is the only trainer to win this race more than once?

Chad Brown has won the Breeders’ Cup Juvenile Fillies Turf twice: in 2008 with Maram and in 2014 with Lady Eli.

When was the first Breeders’ Cup Juvenile Fillies Turf?

The Juvenile Fillies Turf is one of the most recent additions to the Breeders’ Cup program. It was added as an ungraded race but today is a Grade 1.