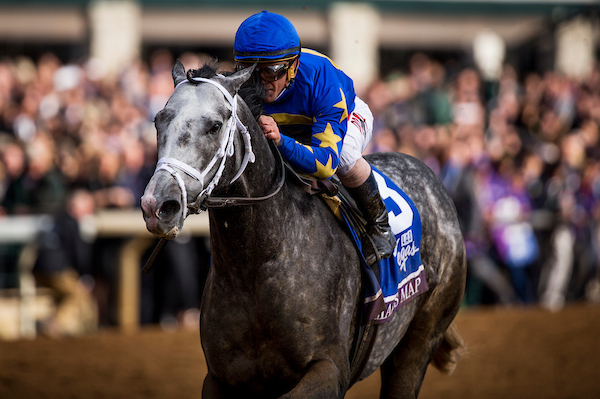 Despite lowering the track record over the Santa Anita turf course last out when winning the top local prep for the Breeders’ Cup Mile, he was excluded from that race. It may benefit the 6-year-old gelding, who is no stranger to the main track. He’s been rock solid this year from four starts, including a runner-up effort behind likely BC Sprint favorite Masochistic two back going seven furlongs. While he may not get a hot pace, he’s proven he doesn’t need it to give his best effort. At his best, he should be able to snatch his biggest win in this race at attractive odds.

With a pair of solid runner-up efforts this fall, he appears to be rounding back into the form he showed overseas early last year when he ran the table at Meydan. He’s also shown nice versatility in each of his last two efforts, happy to press a tepid pace or sit well off fast fractions to mount a late bid. With an uncertain pace scenario looming in this race, that versatility should bode well for him. If he runs up to par with either of his last two, he should be right there at the end of this race.

He is the deserving favorite for this race given the body of work he’s put together throughout his career; the only two horses to best him this year are both future Hall of Famers. But 6/5 is a tough price to accept when he is being asked to shorten up to a distance at which he’s not been frequently battle-tested, and for a horse that hasn’t seen the winner’s circle since last year. He may be the best of the early speed horses, but whether or not he can hold off the cavalry charge is a big question for a horse that may go off at even-money or less.

Last year’s sprint champion curiously opts for the Dirt Mile this year off only one prep race. Bettors are forced to make a choice on this colt based off limited information: a mediocre return to the races five weeks ago, an unproven race record in races beyond sprint distances, and an uninspiring series of works leading up to this race. He’s clearly a talented animal, and he catches what many consider to be a weak edition of the Dirt Mile, but putting it would be tough to put him higher than this on my list. That said, I’ll be using him in exotics.

Never worse than second in his eight lifetime starts, Liam’s Map won the Dirt Mile as the final start of his brief but brilliant career.

When was the first Breeders’ Cup Dirt Mile?

The Breeders’ Cup Dirt Mile was only added in 2007. The 2016 edition will be the tenth anniversary of the race.

Which horse has won the Breeders’ Cup Dirt Mile more than once?

How many trainers have won the Dirt Mile twice?

No trainers have won the BC Dirt mile more than once - yet!