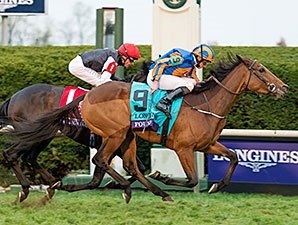 1st Choice: #4 FLINTSHIRE (5/2) – Yes he was beat last time out but it was in a small field with no pace, no rabbit and on a less than firm turf which has been his undoing before.  Rather than bypass that race and train up to the Cup Chad Brown opted to run.  I’m ok with him getting beat because I firmly believe that he is the best turf router in the US.  He will have firm going and he will have pace.  No excuses.

2nd Choice: #10 FOUND (3/1)- If he gets beat it could be by Found, last year’s winner of this race.  When she stormed to victory last year she was only 3.  Going against older males.  This year she has settled for second in 6 of her outings but was the best when it counted in the Arc de Triomphe.  No horse has ever won the Arc and then the BC and the bar is certainly high to go BC-Arc-BC but if anyone can condition a globe trotter it’s Aidan O Brien.

3rd Choice: #12 HIGHLAND REEL (3/1)- Speaking of Aidan O Brien, he sends out Highland Reel as well.  I hate to be so chalky but if you like Found and Flintshire you have to like Highland Reel as well.  He has finished very close to Found this year and he beat Flintshire when they met in Hong Kong last year.  He has successfully made the trek before as he won the G1 Secretariat in 2015.

“LONGSHOT”: #2 Da Big Hoss (20/1) – 4 in a row for Da Big Hoss a former $50,000 claimer.  Turf marathoning is his game but the class is a steep ask here.  Mike Maker has been smart with his placement of this 5 year old but he deserves another shot here as his effort last year wasn’t terrible and you can argue he’s a better horse.  The little guys will be cheering when Hoss is rolling late.

Which trainer has the most Breeders’ Cup Turf wins?

How horses have won the Breeders’ Cup Turf more than once?

What was unique about the 2002 Breeders’ Cup Turf?

Two horses, High Chaparral and Johar, finished in a dead heat for the win in the 2003 running of the Breeders’ Cup Turf.