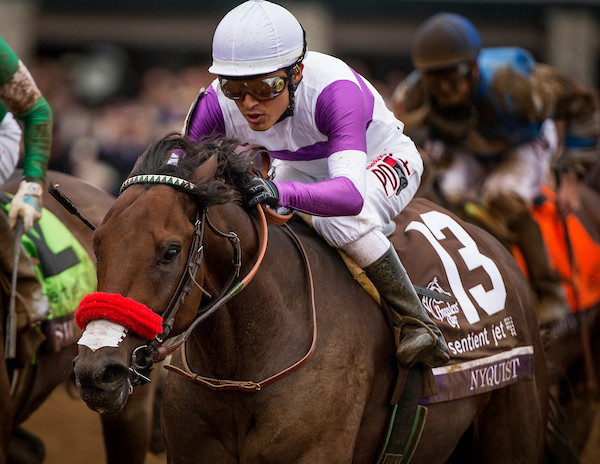 1st Choice: #10 NOT THIS TIME (7/2) –  Since getting to go two turns this son of Giants Causeway has been an absolute beast on the racetrack.  He broke his maiden by 10 and followed that up with a convincing 8 length score in the G3 Iroquois.  Watching him in the mornings at Santa Anita I can’t find fault.  He’s good sized, balanced with a beautiful, ground gobbling stride.

2nd Choice: #5 CLASSIC EMPIRE (4/1) – Except for his race where he took a turn out of the gate, Classic Empire has yet to taste defeat.  As long as the Casse barn knows of his quirkiness I think there is a ton of upside here.  Third start off the layoff, he’s sprinted and routed (and lets be honest, he’s bred for two turns) and hes got a good style.   In addition, he broke from the rail in his first 2 starts and from the outside in his Grade 1 score.  Not easy feats for a juvenile with obvious mental issues.  If he ever puts it together, watch out!

3rd Choice:  #7 GORMLEY (5/1) –  John Sheriff’s doesn’t win  a lot of debut races.  Generally his horses “need time”.  Except Zenyatta.  And Gormley.  He’s undefeated, he’s won at a sprint and two turns and he looked like the real deal last time out.  He seems effortless in the mornings and brings in the perfect pedigree for a Breeders’ Cup winner.

“LONGSHOT”: #2 SYNDERGAARD (6/1) – After starting off in the state bred ranks, Syndergaard showed he was the real deal by showing up against Grade 1 company last out in the Champagne.  He’s fast.  Really fast.  He was only beat a nose in his first try routing and against open company.  I think he has tons room to improve and turn the tables on Practical Joke.

How many horses have won both the BC Juvenile and the Kentucky Derby?

Who has the most wins in the BC Juvenile as a trainer?

How many Kentucky Derby points is the Juvenile worth?

As of 2016, the Juvenile awards 20 Derby qualifying points to the winner, 8 to second, and 4 to the third place finisher.