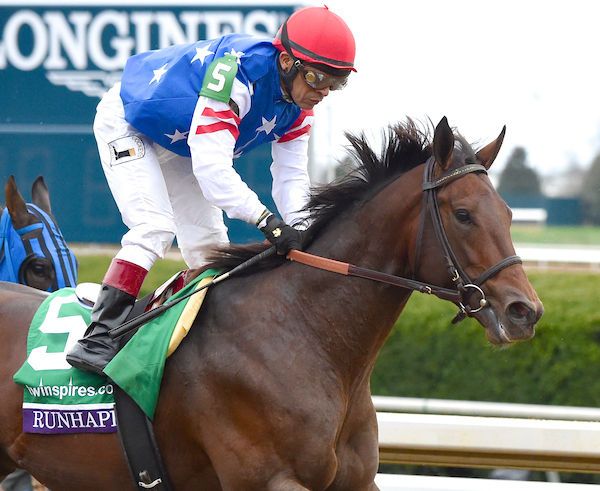 1st Choice: #5 AP INDIAN (4/1) – The Sprint is a tough race stocked head to toe with fast horses.  But none of them have won as many times as AP Indian.  I respect what Arnaud Delacour did when he opted to bypass a muddy Belmont track and head to the Phoenix.  It’s not easy to change plans and still eek out a win because horses are trained to peak for efforts so I give him a lot of respect.  5 in a row is no easy feat either.  So why Indian over Lord?  Easy as price.  I’m looking for the better price with a logical horse and that’s how I wind up here.  Would love to see these connections in the Winners Circle as well.

2nd Choice: #6 LORD NELSON (5/2) – NO other horse in this field may be as fleet as Lord Nelson.  He has become the top sprinter on the West Coast, he is the only horse to run 6 furlongs in sub 1:08 and he has home court advantage.  But there is the chance that maybe we are seeing a horse who has been beating of on lesser foes and is going to falter against real competition.

3rd Choice: #7 MASOCHISTIC (2/1) – I really thought we would see this horse in the dirt Mile and I would have preferred him there.  Since Ron Ellis has been able to teach this horse to mellow out he is a force to be reckoned with.  It is hard to decipher what is next for Masochistic.  Last year he started off the year impressively and then fizzled out finishing with a DUD in the Breeders’ Cup.  This year he has only 2 outs.  Good outs.   Visually impressive outs.   But only 2.  So now what?  Is he primed for another stellar effort being lightly raced as opposed to last year?  I am not convinced.  He is definitely fit enough with both of his outs being further than the 6 furlongs he will go here but may I point your attention to that 1-5 win record in three quarter races.

Longshot:  #1 MIND YOUR BISCUITS (15/1) –Just recently took the big jump into open stakes company and has aquitted himself well.  His lone disappointing effort was a 7 furlong race and looking back through his PPs I think 7 is beyond his grasp.  Lucky for him the BC Sprint is only 6 furlongs and I think he will get the perfect trip.  There will be flames from the front runners and so he will have plenty of pace to close into if he’s good enough.

Runhappy defeated a field of 13 other horses as the post time favorite to win the 2015 BC Sprint by nearly a length.

Who was the first female trainer to win a Breeders’ Cup Race?

Jenine Sahadi won the 1996 BC Sprint with Lit de Justice to become the first female trainer to win a BC race.

Who holds the record for most Breeders’ Cup Sprint victories?

Who is the only horse to win the BC Sprint more than once?

Midnight Lute won the BC Sprint in 2007 and 2007 for Bob Baffert and jockey Garrett Gomez.