The people in my life know there is one hour each week most of the year you do not expect calls to be picked up, texts to be answered or really much of anything except the occasion OMG! tweet... Thursdays at 10 pm ET are reserved for Scandal.

Why do I share this? Because the yoctosecond California Chrome took the lead at the top of the Pimlico stretch today, all I could hear was Harrison Wright's voice and the You Can't Cuss on Network Television version of what he really wanted to say... 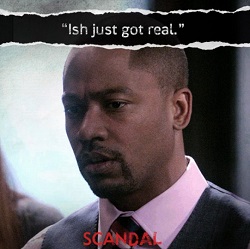 California Chrome did it.

In the space of 13 days-23 hours-48 minutes (or 335 hours), the coppery chestnut has won the first two jewels of racing's Triple Crown.

But I don't care. And it's not because - like 'Chrome - I'm a Cal-bred. Or because I really, really, really want to see a Triple Crown before the next ice age hits (or my cat Velcro graduates from Harvard ~ whichever comes first).

It's because this is the story that shouldn't be. 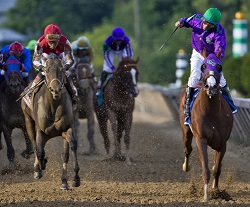 The owners bought the mare for relative peanuts after she was their first foray into racehorse ownership with a syndicate. They bred her to a young, unknown stallion (Lucky Pulpit has five crops of racing age, making 'Chrome from the second year at stud). They foaled her in California ~ a state with an improving (but nowhere near-yet thriving) breeding program. They got a healthy foal who grew up big and strong and sent him to a now 77-year-old trainer who isn't exactly the biggest name on his own circuit, let alone on the national stage.

And they struck gold. Well... chrome.

"He's America's horse because, in my opinion, what he's doing for two guys that work their butts off every day just to put beans and bacon the table - this horse has given everybody else out there the incentive to say 'You know what? We can do it too. We can do this also.' It may not be a racehorse. It may be the new idea that they have in their head or a new product or whatever the case may be, but we just hope that this horse is letting America know that the little guy can win." - Steve Coburn, co-owner of California Chrome

I got asked earlier today on WBAL about the lack of time between races and how it wasn't a very Art Sherman'y move. And how I answered wound up being echoed by Art Sherman himself in the post-Preakness press conference: very few trainers allow the horse to be the horse quite like Mr. Sherman. I've had the pleasure of clocking his horses on-and-off for the last four years: he's a magician in the best sense of the word ~ in the most old-school sense of the term.

Sherman used a line when asked about his view of the race today that tells you everything you need to know about the man who shared a cross-country rail car with Swaps to a victory in the 1955 Kentucky Derby and who has himself turned into a Kentucky Derby winning trainer... "I knew going into the first turn Victor was in that position. As a former rider, he had to make a decision: whether to go on or get in behind horses. He got a chance to move him out. When I saw him at the half-mile pole having dead aim on the leaders, I said 'now Victor: we're in the driver's seat.'"

There's nothing Sherman hasn't seen. And to have his sons - both trainers - by his side through this... can you imagine how incredible a feeling this is for a father?

For as many times as the horse's coat will glimmer in the sun or as much of a quote machine as Coburn will be in the next three weeks, the humble Sherman will continue to enjoy his moment in the spotlight.

"I'd never won a million dollar race. I was always kind of a claiming type of trainer. Now I'm up there with all the big boys and I'm saying 'wow!' It's just an honor being blessed to have a horse like him." - Art Sherman, trainer of California Chrome

These are good people. This isn't a Disney script and yet it's playing out like one. It turns out: this is how the story is supposed to go. That doesn't mean I'm putting California Chrome in the winner's circle in three weeks: there's still plenty of luck that has to be on the colt's side. And we racing fans have been burned all too often by false promises of Freakishness. But this horse gives you the feeling that something's different. Something's special. Something's magical. 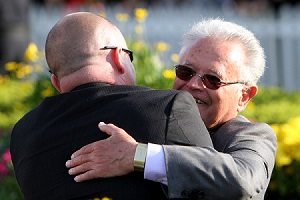 
For a girl who spent all of last December saying "no way a son of Lucky Pulpit training at Los Alamitos wins the game's biggest races" ... he made me a believer in the Santa Anita Derby. It wasn't the devastating margin: it was how he slipped away from the field at the top of the stretch, in that weird no-man's-land: where the top of the turn meets the 8th pole. Very few horses skip away like he did. He made the same move in the Kentucky Derby. And if you have the run off the turn, Pimlico is the best track to do it ~ as he proved yet again today.

It's more than push-button. It's just plain special.

Nothing about California Chrome on paper fits the traditional Triple Crown Winner mold. But maybe - just maybe - that's ok: this isn't the game my great-grandfather introduced my grandmother and my mom to. This is the new age of racing: something that would have been scandalous to generations past. 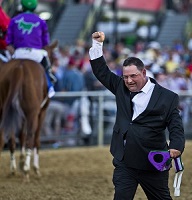