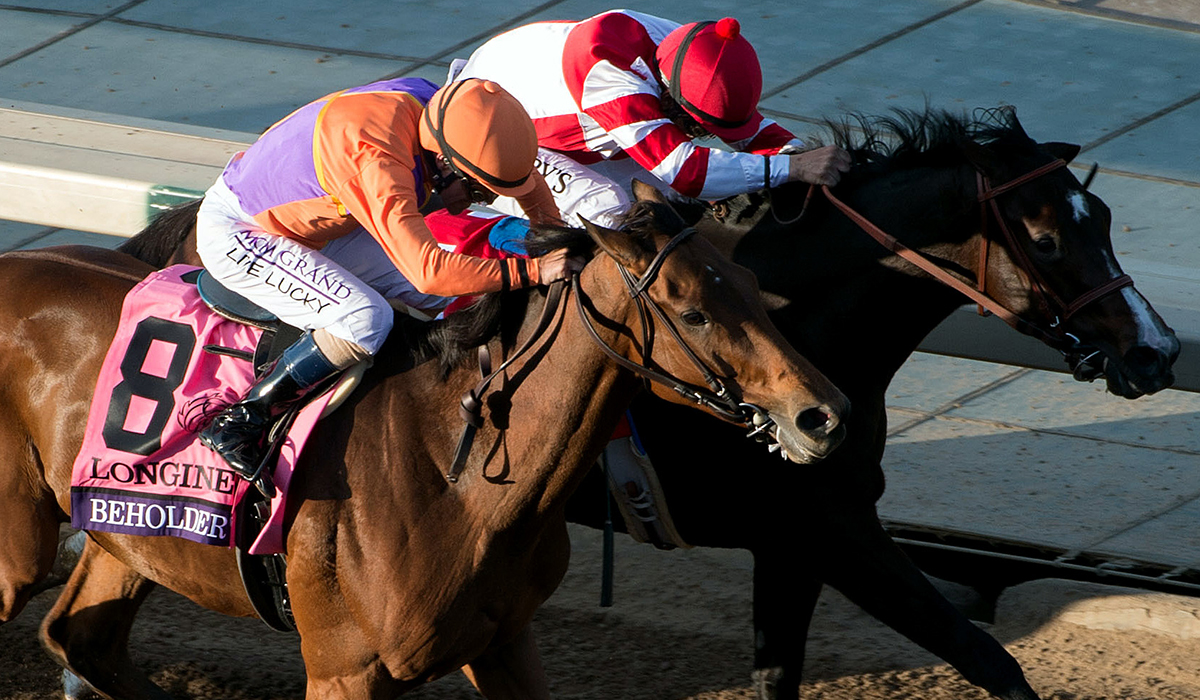 One of the greatest racehorses, not just one of the greatest mares, to ever run, ran her last race this past Nov. 4, 2016. Beholder, after 5 incredible years of racing, has gone to the farm. She was, without any doubt, one of the best that I've ever seen run live. Here's my Beholder Top 5!

I was in attendance when Beholder beat the great Songbird by a hair in the Breeders' Cup Distaff. It was easily one of best races I've ever seen. To watch it as it happened, near enough to the rail to see those 2 great champions rush to the finish line in an unbelievable duel, is a moment that I'll never forget.

Beholder, to quote President-Elect Trump, was "big league" in this race. The thousands of racing fans in attendance, including my brother and me, nervously waited for the results of the photo. Even those who lost money on favorite Songbird had to marvel at Beholder's incredible determination.

The Champ dominated a talented group of male horses in the 2015 Breeders Cup Classic. I watched the race while hanging out at the Aria Racebook in Las Vegas. Those horseplayers weren't as excited to see Beholder, probably because she was the chalk, win the 2015 P. Classic as the horseplayers were to see her win the BC Distaff on Nov. 4 at Santa Anita. It didn't matter to me. I had everything that day keyed to Beholder. She won in such great style that like the 2016 BC Distaff it was a race that I will never forget.

Beholder didn't win the 2013 Kentucky Oaks. She finished second. But the horse that she lost to, Princess of Sylmar, got to run into an incredible :22.84 first quarter-mile and a :46.79 half-mile pace. Midnight Lucky, a Bob Baffert trainee, and Beholder were on the lead while Princess of Sylmar got a chance to chase both of them. Watch how Beholder continues to run as hard as she can to the wire. This race, Beholder went off at 9 to 1, was a signal of what was to come. Wow.

There were only 6 horses in the 2013 BC Distaff field. But, think about who 4 of the 6 were:  Beholder, Royal Delta, Closed Hatches and Princess of Sylmar. Beholder didn't just win the 2013 Breeders' Cup Distaff, she dominated. She took the lead from Authenticity. She never looked back. This was the moment where Beholder took her fist step into the greatness category.

Beholder beat another well-regarded Baffert filly in the 2012 BC Juvenile Fillies. Executiveprivelege went off as the favorite in the race. Rafael Bejarano gave the Baffert filly a great ride. Rafa almost got Executiveprivelege there. But Beholder, under Gary Stevens, was just too good. She was awesome when winning  this race at a bit over 3 to 1 odds.

Horseplayers worldwide have to agree that they're going to miss Beholder on the race track. Since I'm a SoCal based horseplayer, it's going to be different for me, especially during the Summer De l Mar Meet, knowing that the Richard Mandella trained future hall of fame Beholder is going to be in the breeding shed and not on the Del Mar dirt.