Champion of Champions at Los Alamitos

One of the premier events in Quarter Horse racing, the $600,000 Champion of Champions (G1), will be contested on Saturday, December 12 at Los Alamitos. Since its first running in 1972, the 440-yard stakes has a distinguished list of legends including Charger Bar, Dash For Cash, Refrigerator and Tailor Fit. The winner will undoubtedly be strongly considered for AQHA world champion honors, when the awards are presented next month. In the four-decade history of the Champion of Champions, the winner has emerged as world champion 27 times.

While the draw has not taken place yet, one horse who will get his share of attention this week is Ron Hartley's Moonist. Purchased at the 2012 Los Alamitos Equine Sale for $21,500, Moonist won four derbies at Los Alamitos in his 3-year-old campaign and continues to impress this year with multiple stakes victories. His latest score in the $125,000 Robert L. Boniface Los Alamitos Championship (G1) was Moonist’s 20th win from 29 starts. The California-bred son of Separatist has bankrolled over $700,000.

He is expected to face Heza Dasha Fire, the talented 3-year-old, who will make his first start against older horses; Louisiana-bred Dashin Brown Streak, off sharp efforts at Remington Park 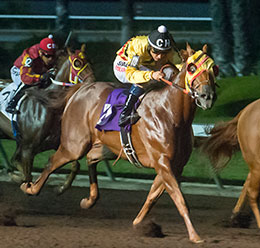 Quirky, a multiple graded stakes filly, is expected to run in the Champion of Champions

; Rock You, who qualified with a win in the Z. Wayne Griffin Trials; top filly Quirky and Far Niente, who topped Moonist in the Vessels Maturity.

Mark your calendar for Saturday, December 12 as the 2015 Champion of Champions will be one of the most exciting in the distinguished history of the Grade 1 stakes.
Racing
Loading...