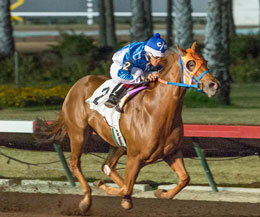 The trials, to be run at 400-yards, will determine the finalists for the Winter Championship, and one additional bonus. The winner of the final will earn the first starting berth to the 2016 Champion of Champions. But now it’s back to the track for Heza Dasha Fire, as he’ll be part of an outstanding Winter Championship trial that will also feature four-time AQHA champion Moonist. Their rematch from the Champion of Champions will be the featured seventh race on the Sunday card.

In his career, Heza Dasha Fire has won 11 of 12 starts, while coming into this race after enjoying a perfect 2015 campaign. All five of Heza Dasha Fire's wins came by at least a daylight margin of victory last year, with his closest call being a length win in the Los Alamitos Super Derby. Heza Dasha Fire also won the Champion of Champions by 1¼-lengths and the Golden State Derby by 1 1/2 lengths. His dominant campaign earned him the title of champion 3-year-old gelding and champion 3-year-old in addition to the World Champion crown.

Cruz Mendez, the meet’s leading Quarter Horse jockey here last year, will pilot Heza Dasha Fire as usual. He’ll start from post number one. Heza Dasha Fire won the 2014 Ed Burke Million Futurity from post one, but his only career loss also came from that spot that year. He’ll enter the trials with earnings of $1,689,388.

Ron Hartley’s Moonist is ready to work as well. A winner of 20 of 30 career starts and earnings of $802,194, Moonist will make his 2016 debut from post number six in this event. Runner-up to Heza Dasha Fire in the Champion of Champions, Moonist’s 2015 campaign included five stakes wins headed by the Robert L. Boniface Los Alamitos Invitational Championship and the Go Man Go Handicap. He ran second in this race last year. Cesar De Alba will pilot Moonist for trainer John Cooper.

First post for the Sunday evening card at Los Alamitos is 5:10 p.m. (PT). The final of the Los Alamitos Winter Championship will be contested on Sunday, February 14.
Racing
Loading...