This Saturday night Charles Town will offer a trio of open stakes highlighted by the Grade III, $350,000 Charles Town Oaks for three-year-old fillies as well as five West Virginia-bred stakes all designated as "Win & You're In" races for the upcoming West Virginia Breeders Classics card on October 8.

Saturday's feature race is the Grade III, $350,000 Charles Town Oaks for three-year-old fillies which drew only six runners and will hardly not be a springboard to the Breeders Cup Filly & Mare Sprint for any of the participants. Among the six entrants is only one stakes winner, Sophia's Song, and the field has combined earnings of roughly $525,000 and all six are still eligible for non-winners of three other than allowance events. Mia Torri won at first asking but has been second in two allowance races since at Arlington Park.

Sophia's Song, a sophomore daughter of Bellamy Road trained by Todd Pletcher, won three straight races at one stretch, including the $75,000 Caesar's Wish Stakes at Laurel Park before running second last out in an allowance event at Saratoga. She will likely be the odds-on choice in this soft group while breaking from post six under Javier Castellano, but Sophia's Song is hardly a cinch in this spot in what will be her first try traveling two turns.

Just to her inside is Covey Trace, a daughter of Stevie Wonderboy trained by William Denzik, Jr., who will arrive fresh off a sharp allowance score at Ellis Park. Covey Trace owns a modest 3-1-3 slate and $110,000 bankroll from 10 starts, but she is winless in three tries on the turf so her dirt track record is solid. Two of her wins have come over the Ellis Park strip, but she also owns an allowance tally at Churchill Downs and rates the main threat to topple the favorite.

Giddy Up drew the rail and arrives off a solid second-place effort behind Appealing Maggie in the Ms Woodford at Monmouth Park. Decoratedwithstyle has won three of 10 starts with her success coming at Penn National. Quick Release has won twice in nine starts, but she has also been second and third in good stakes tries. Mia Torri won at first asking at Arlington Park but has been second in two allowance tries since then and tries the main dirt track and two turns for the first time.

One race earlier Charles Town will host the $100,000 Pink Ribbon Stakes for older fillies and mares also traveling the two-turn distance of seven furlongs. Flattering Bea has thrived over the oval, posting a 6-2-1 slate and $300,000 bankroll from just 11 starts here for trainer Crystal Pickett and owner-breeder James Arrison. Sweet On Smokey, a solid second in the $150,000 Sugar Maple Stakes here on the Charles Town Classic undercard in April, Making Havoc and Pretty Fancy all merit respect in this spot. Kluvyabye owns a 7-5-6 slate and $170,000 bankroll from 39 lifetime outings, all over this strip. 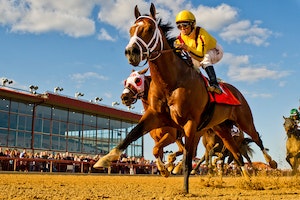 One race earlier it will be the older boys on display in the $100,000 Wild & Wonderful Stakes at seven furlongs. While the Pink Ribbon looks fairly wide open, Rise Up looms as the odds-on favorite from the rail in this event. He won his only previous outing over the strip when he captured the $100,000 Charles Town Juvenile here at age two and boasts a 9-3-5 slate and earnings of over $1 million from 26 career tries for trainer Tom Amoss.

Four of the five prior races on the card will are West Virginia-bred stakes, all designated as "Win & You're In" events for the upcoming West Virginia Breeders Classics card in three weeks. There are also three nine-furlong Handicaps that will serve as preps for several talented West Virginia-breds eyeing the Classics night stakes and the card opens at 5 p.m. with a two-turn maiden special weight for West Virginia-bred three-year-olds and upward.

One race before the Wild & Wonderful, the state-bred fillies and mares will have their last chance to prep for the $150,000 Cavada Stakes for fillies and mares on Classics night. Spa Creek rallied from well off the pace to capture the $100,000 Hancock County Stakes at Mountaineer Park on the West Virginia Derby undercard for trainer Jeff Runco, while Red Hot Diva was the beaten favorite in that event but returns to a strip where she sports a commendable 13-8-0 slate and $350,000 bankroll from 27 tries for trainer Ollie Figgins, III.

One race earlier the older horses will be on display in the It's Only Money Stakes, a "Win & You're In" event for the West Virginia Dash For Cash BC here. Greenway Court won has won the last three runnings of the It's Only Money, twice using that victory as a springboard to success in the West Virginia Dash For Cash. The James W. Casey seven-year-old Windsor Castle gelding owns a solid 15-8-2 slate and $388,000 bankroll from 28 starts here. He was second to Chasin Rush last out, but that one was upended by Eutaw Street in his subsequent start.

One race earlier another older group of state-bred runners will contest the Frank Gall Memorial, the "Win & You're In" prep for the $500,000 West Virginia Breeders Classic. In The Fairway arrives off a sharp score in the $100,000 Northern Panhandle Stakes for state-breds on the West Virginia Derby undercard for Runco and rates the choice here. But the speedy and talented Hidden Canyon returns off a very lengthy layoff for owner-trainer Javier Contreras. Hidden Canyon has been idle since running second in the Classic last fall and owns nine wins and $315,000 bankroll from 14 career tries.

Another Casey homerbred, Scottish Denis, looms as the favorite in the Rachel's Turn Stakes for two-year-old fillies, the "Win & You're In" race for the Triple Crown Nutrition BC. Scottish Denis romped home seven lengths clear in 52.92 in her career debut here and gets the nod over Bighearted Nana, the beaten favorite in a two-turn maiden special weight race here in her most recent outing.

Two races earlier it will be the juvenile colts on display in the Henry Mercer Memorial, the "Win & You're In" event for the Vincent Moscarelli Memorial on Breeders Classics night. Unrideabull showed speed and grittiness to win at first asking for trainer Jody Caison and owner-breeder Michael Sterling, while The Great Ronaldo has been second four times in five starts for trainer John Salzman, Jr., and the beaten favorite in his last two. Anywhere But Here won his most recent outing after running third in his debut.

Three other Casey trainees will compete in three, nine-furlong Handicaps on the card. In the second race, defending WVBC Classic champ Charitable Annuity will clash with Percussion, a multiple graded stakes placed runner, then two races later Castle Bound will clash with Runco trainee Navigate and in the nightcap Return To Denis, fresh off her 24-1 upset score in the Sylvia Bishop Memorial, will seek her second straight in another prep for Breeders Classics night.
Racing
Loading...