This Saturday night thoroughbred racing fans will focus their attention on Charles Town as the historic Jefferson County oval hosts the 30th edition of the West Virginia Breeders Classics.

Since the inception of the WVBC, brainchild of NFL Hall of Fame linebacker Sam Huff, Charles Town has hosted all but one edition of the event. Less than 10 years ago total purses for the nine-race card approached $2 million, but this year's card is worth roughly $1.1 million.

This Saturday's card will actually kick off with a retirement ceremony for an older gelding who seemed like a permanent fixture on the WVBC program. Russell Road, a 10-year-old Wheaton gelding trained by James W. Casey for owner Mark Russell, recently retired with 31 wins and just over $2 million banked from 62 starts. He is only the second WV-bred to eclipse $2 million in career earnings - the other being Soul Of The Matter - and he is one of only two horses to win the WVBC Classic three times, the other being Confucius Say.

Saturday night's opening race is the $75,000 West Virginia Dash For Cash, a one-turn sprint for state-bred older runners. Defending champion Greenway Court will seek his third victory in this event in the last four years, but his recent form has not been good. On the contrary, Eutaw Street won the local prep for trainer David Walters and owner-breeder Fairview Farms and is razor sharp now. But so is RC's Daisy Duke, the lone filly in the field who drew the far outside and has abundant early speed to make her presence known early and throughout the 4 1/2-furlong affair.

One race later in the $75,000 Vincent Moscarelli Memorial for state-bred two-year-old colts and geldings, Unrideabull arrives having won both of his starts for trainer Jody Caison and Lime House Louie heads into this event off a determined score in the $60,000 Jamestown Stakes on the turf at Laurel Park. Runnin'toluvya broke his maiden in sharp fashion last out in his third try, but not one of the 10 entrants has won going two turns and only two - Jackys Man and Laso The Man - has even tried it.

One race later in the $80,000 Onion Juice at seven furlongs, In The Fairway arrives having won two straight stakes and four of six races overall this year for trainer Jeff Runco, while Help A Brother and Comeonletsplay were the one-two finishers in this race a year ago and both will be generous prices in this edition of the event.

One race later in the $75,000 West Virginia Lottery Breeders Classic, Runco will saddle the shortest price favorite of the day when he sends out the unbeaten Bullets Fever in this two-turn affair for state-bred three-year-old colts and geldings. 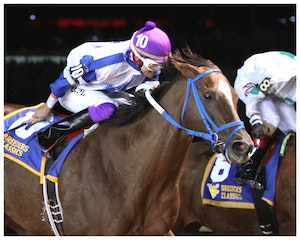 A sophomore son of Fiber Sonde trained by Runco for owner David Raim, Bullets Fever has won all four of his outings this year and is perfect in seven career tries including the Moscarelli Memorial BC last fall. He is a full brother to the talented Hidden Canyon, the runner-up in last year's Classic.

Two races later in the $75,000 WV Division of Tourism BC, Runco will again be expected to visit the winner's circle as he sends out T Rex Express and New London in this seven-furlong affair for three-year-old fillies. T Rex Express has won five of eight starts this year and was second as the 2-5 choice in the Sylvia Bishop Memorial. New London has won four of six starts this year and this Runco homebred could complete another exacta for the longtime local conditioner.

One race later in the $150,000 Cavada for fillies and mares, named in honor of the only mare to upend the boys in the Classic the lone year the event was contested Mountaineer Park, defending champion Cuppa Mocha Mojo will look to end a modest three-race skid for Walters and owner-breeder Terri Catlett.

Navy Ribbon arrives having won all seven of her local tries and eight of nine starts overall for Runco, including the Sadie Hawkins here last month. Red Hot Diva was the beaten favorite in this event last fall and was the beaten choice in the Sadie Hawkins for trainer Ollie Figgins, III, and owner-breeder Naomi Long and has every right to prevail in this spot.

Then one race later in the featured, $500,000 West Virginia Breeders Classic at nine furlongs, defending champion Charitable Annuity will look to join an elite local list of repeat winners when he breaks from post nine for trainer James W. Casey and owner Mark Russell.

Charitable Annuity became only the sixth three-year-old to win the Classic last fall when he overcame post 10 to beat older runners in his first attempt going nine furlongs and three turns. He is seeking to join a list of back-to-back Classic winner's that includes Coin Collector, Taylor Mountain and Confucius Say.

But looking to upend Charitable Annuity in the Classic are Runco trainees Big Bag Dude, Slip The Cable and Navigate, Figgins trainees Ello Govna and Prince of Windsor and the late-running Little Big Sime for trainer Joseph Stehr and owner-breeder Betty Stehr. Little Big Sime has not won in 17 races over the past two years, but he rallied willingly to finish third in last year's edition of the Classic.

Then one race later in the $75,000 West Virginia Triple Crown Nutrition BC for two-year-old fillies, Unaquoi will seek her second straight stakes score and her third straight tally overall for Figgins, who will is also send out Charitable Heart, a determined debut winner in the slop two weeks ago.

Casey homebred Scottish Denis was a sharp debut winner in August then failed as the 2-5 choice in the Rachel's Turn Stakes won by Unaquoi. As was the case with the Moscarelli earlier on the card, none of the starters in the Triple Crown Nutrition BC has ever won going two turns and only Natures Donation and Royalty Fee have even attempted it.
Racing
Loading...