Daytona B Returns to Hialeah Park

One of the top older horses in the country, Daytona B returns to action in Sunday's $25,000 Sawgrass Stakes at Hialeah Park.

The five-year-old gelding has won nine of his 18 career starts, including the $350,000 Bank of America Challenge Championship (G1) last November at Lone Star Park. He is closing in on the half-million mark in earnings. 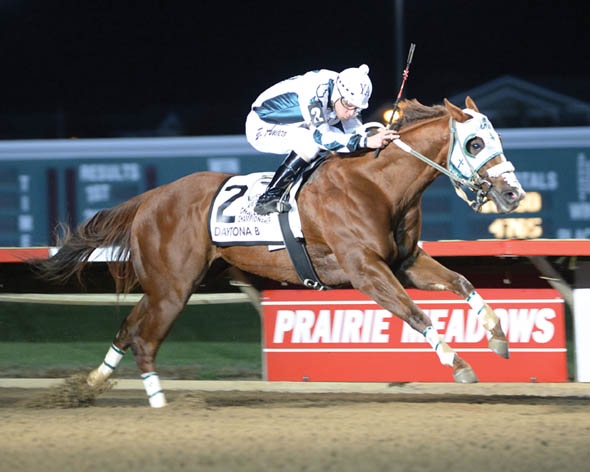 Daytona B relishes today's distance of 440 yards, which at a quarter mile is called the "classic" distance for Quarter Horse racing. He will go off as the favorite, but races today under a new trainer and different jockey. Trainer Yoani Abreu, takes over for Rolando Almanza, and Francisco Raul Ramirez, Jr., will ride, replacing Ricky Ramirez, who is not in south Florida this weekend.

His rivals include Eyesa Famous Eagle, a son of One Famous Eagle, who will be making his first start since running second to Daytona B in the Challenge Championship. The 5-year-old is trained by current meet leader, Judd Kearl and will break from post position two under Rodrigo Vallejo. Another capable runner in the Sawgrass is Dynasty of Habits, a five-year-old mare who faced the highly touted Moonist in California. Bred by Vessels Stallion Farm, she has a win at Hialeah Park start, and will break from the far outside post, next to Daytona B.

There's plenty of time to enjoy the nine-race card at Hialeah before the big showdown on the West Coast, as post time for South Florida racetrack is 12:35 (ET).

Good luck and make it a winning day!
Racing
Loading...