A few days back, I wrote about The Derby's Coming! panic that sets in this week. And I recommended learning a few key points about 2 or 3 horses to become the Know-It-All of your group of friends. Well here's a primer to help with that! 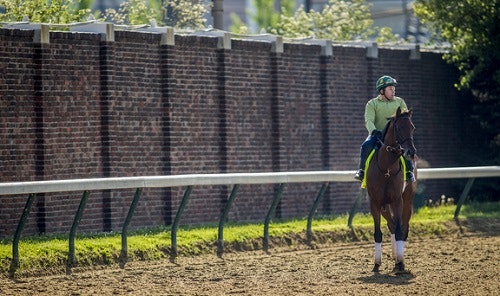 3-Uncle Sigh -         adds blinkers after finishing off the board for the first time in his career last out -         owned in part by the Wounded Warrior Stable, which gives 10% of purse money to US military injured in the line of duty

9-Vinceremos -         captured the Sam F. Davis straight off his maiden win, but hasn’t been able to get back to the winner’s circle -         names mean “to conquer, to overcome” in Latin and is also the name of a therapeutic riding center volunteered at by one of the owners’ sons (and to whom a portion of the horse’s earnings are donated)

12-Dance With Fate -         one of the few versatile enough to own a win on the lead, but also proven to have a successful closing kick -         strikingly handsome colt is the star of the first crop of stallion Two Step Salsa

14-Medal Count -         won the G3 Translyvania and wheeled back in a week to finish a strong second in the G1 Blue Grass -         living up to his pedigree: the dam side suggests early sprinting ability and being by Dynaformer suggests he’ll get better as he gets older and the distances get longer

15-Tapiture -         may have bounced last out after running back-to-back big races -         has never run a bad race here, including winning the G2 Kentucky Jockey Club as a maiden

16-Intense Holiday -         had a decent juvenile campaign, but blossomed upon arrival at Fair Grounds with two really good efforts in graded stakes company -         a dark bay colt who runs for the formidable combination of Pletcher / John Velazquez (aka JohnnyV) / Starlight Racing ~ the same team as 2012 2yo Champion Shanghai Bobby

19-Ride On Curlin -         may be the most consistent horse off the whole Derby Trail even if he never got the win: he always runs his race -         one of three horses in the Gowan barn; his exercise rider was the regular rider for Monarchos, who also broke from post 19 (and won the 2001 Derby)