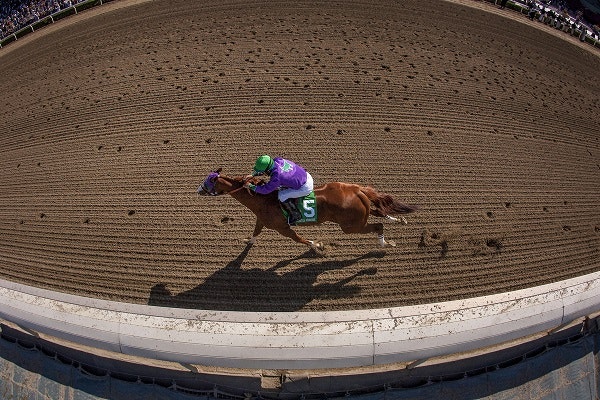 With less than two weeks until the 2014 Kentucky Derby, the race’s field is finally beginning to take shape. Defections are still possible, but right now (as of Tuesday morning), there are 24 horses with 20 or more Derby points vying for 20 spots in the starting gate.

Last week, I asked 25 questions, one for each of the Kentucky Derby contenders. In this space, I’ll bring you my Kentucky Derby power rankings, designed to group horses into tiers and figure out who the race sets up for. Mind you, this is not a ranking of horses’ abilities, but rather the chances I’ll be betting them on the first Saturday in May.

Without further ado, here are the rankings.

I use the term “cheap” figuratively. These are good horses, of course, and I’m confident one of them will make the lead heading into the first turn. However, they’ll have plenty of competition for that spot, likely leading to sizzling early fractions and a likely pace meltdown.

Harry’s Holiday, Medal Count, We Miss Artie, and Dance With Fate all earned most of their Derby points on synthetic surfaces. Animal Kingdom did that in 2011 and won the roses, but that was an exception to the rule. Meanwhile, Vinceremos ran two good races at Tampa Bay Downs, but that’s a strange track, and his races elsewhere are no great shakes.

This tier represents the first horses who I think could run well on the first Saturday in May. Candy Boy and General a Rod have a ton of similarities. Neither needs the lead, and both have run their races on tracks that may have worked against them to a point. They may be able to rate a bit more in the Derby, and while both probably need huge steps forward to win the race, it wouldn’t surprise me if either (or both) of these horses picked up a check (or checks).

PRIMED FOR A BOUNCE

No Derby prep effort was as much of a shock as Danza’s waltz in the Arkansas Derby. A repeat performance means he’s a huge threat, but I’m not sure that’s in the cards. He’s run just four times in his career, so he doesn’t have much of a foundation, and he sat a dream trip that day. One would think he’ll have tougher sailing in the Derby, so I’m in no hurry to bet on him.

You know the story: No horse has won the Derby without running as a 2-year-old since Apollo in the late-1800’s.  Hoppertunity, though, has run five times this year, tied for the most 2014 outings in the prospective field. He was a distant second behind the probable Derby favorite last out, but Mike Smith didn’t ask him much in the stretch that day. If he repeats his Rebel form, where he beat several very good horses, he’s got a shot.

ARE THEY THIS GOOD?

Commanding Curve will get some support strictly based off his similarities to last year’s runner-up, Golden Soul (same trainer-jockey combination, same running style). Ride On Curlin has run well and gets Calvin Borel, while Samraat was not disgraced in defeat last out and has several gritty wins to his credit.

My thinking here is that these horses are talented, but have major flaws. Commanding Curve hasn’t beaten winners, Ride On Curlin may have second-itis, and Samraat has had some trouble switching leads late in his races. Flaws tend to get exposed on this stage, and while I wouldn’t be shocked if all three ran well, they’ve all got things to overcome.

If he repeats his Wood Memorial effort, he could win. However, that was easily his best race ever, meaning a bounce is very possible. He had a perfect set-up, and even in running by the early leaders, he weaved down the stretch. He’ll be going in the right direction late, to be sure, but I don’t think there’s value there (as opposed to three of my top four).

LYING IN THE WEEDS

Think back to last year’s Arkansas Derby. Oxbow was already in the Kentucky Derby and got a miserable draw. Gary Stevens tried to rate him. It didn’t work, but in saving his horse, he got three strong runs out of him in the Triple Crown races. In a sense, what looked like a bad race on paper was actually a blessing in disguise.

Uncle Sigh ran a sneaky race in the Wood. He missed the break, forcing him to run from off the pace for the first time in his career, and he went wide around the first turn. However, he gained some ground late, meaning he may have gotten something out of the race.

Meanwhile, already in this year’s Derby field before his final prep, Tapiture ran fourth in the Arkansas Derby after a miserable trip. I’m not entirely sure he was fully cranked that day, and I think some improvement (at a much better price) may be in the cards.

From a betting standpoint, I’d MUCH rather take anywhere from 15-1 to 25-1 on these two horses than 8-1 or so on Wicked Strong. There’s more value, and more potential for improvement if they run their races in the Derby.

For a horse that’s really done very little wrong, Intense Holiday is getting no attention going into the Derby. He came off a layoff to run third in the Holy Bull on a track that didn’t favor his closing kick, he surged late to win the Risen Star, and he ran an OK second behind a loose-on-the-lead winner in the Louisiana Derby.

There are some concerns here. He’s proven to be a bit headstrong, and the weaving at the top of the stretch last out was alarming. However, doesn’t this sound an awful lot like Wicked Strong? Wicked Strong, as mentioned, may go off in the 8-1 to 10-1 range. Intense Holiday may be triple that price, and the trainer-jockey combination of Todd Pletcher and John Velazquez has certainly shown an ability to win races.

His breeding (by Harlan’s Holiday, out of an Unbridled’s Song mare) indicates he’ll love the distance, and his works at Palm Meadows have been remarkably consistent. If you don’t like the favorite, you could do a lot worse than backing Intense Holiday, a proven closer who will be a big price in a race full of speed.

I’m not going to get cute. If California Chrome transfers his West Coast form to Churchill Downs, he probably wins. His high cruising speed and big turn of foot have pushed him to the top of the Derby points standings, and he’s beaten a number of good horses on his way there.

If you want to bet against him, I understand. There’s a chance he goes off at 3-1 or lower, and in a 20-horse field, that’s not an exciting price. Also, the Santa Anita Derby has produced just two Derby winners in the last 15 years (Giacomo and I’ll Have Another), and while the consensus seems to be that he can rate, he hasn’t had to in his past several starts. Still, assuming all goes well, California Chrome will be the one to beat in the Kentucky Derby.