One of life’s greatest time-wasters is “20 Questions,” a game where one player thinks of an object and another tries to deduce it by asking questions. Let’s put a twist on things in an attempt to guess the winner of the 2014 Kentucky Derby!

I’ll ask 25 questions… one for each hopeful in the top 25 of the rankings. And, with a little luck, the answers will narrow down the likely winners: 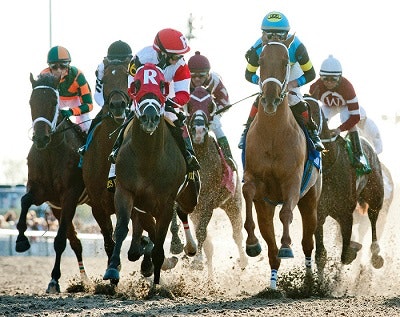 1) California Chrome (150 points): Will his California form come with him? That’s been a major issue with West Coast horses, as three of the last four Santa Anita Derby winners have failed to finish better than 16th on the First Saturday in May.

2) Vicar’s in Trouble (120): Can he win with a less-than-ideal trip? His win in the Louisiana Derby was strong, but it came after a perfect ride by Rosie Napravnik. Two back, though, he ran third from an outside post in the Risen Star, beaten more than five lengths.

3) Dance With Fate (108): Will he run? The synthetic specialist may not ship back to Kentucky to run on conventional dirt.

4) Wicked Strong (102): Is he mature enough? Even in winning the Wood Memorial, he weaved through the stretch despite a clear path.

5) Samraat (100): Can he show a late turn of foot? His tactical speed has won him three stakes races, but he was outkicked in the Wood (even if he ran on well).

6) Danza (100): Was the Arkansas Derby a fluke? His win came out of nowhere, and there’s a chance he could bounce off of that effort in Louisville.

7) Hoppertunity (95): Can he defy the Apollo curse? No horse since the 19th century has won the Derby after not racing as a 2-year-old.

8) Intense Holiday (93): Is he the “clunk-up” type who gets up for a share? He may not be talented enough to win, but every year it seems one closer benefits from a perfect set-up.

9) Wildcat Red (90): How long can he contend? The front-runner won’t be alone in chasing the lead.

11) Ride on Curlin (55): Can he break his streak of minor placings? He’s never won a stakes race despite some strong runs at Oaklawn Park.

12) Chitu (54): Can he get the distance? The finish of the Sunland Derby wasn’t pretty, and his sire (Henny Hughes) was a sprinter.

13) Tapiture (52): Did he peak too soon? Though his place in the Derby starting gate was assured, his fourth-place finish in the Arkansas Derby was alarming.

14) Midnight Hawk (52): What’s the plan here? Bob Baffert is sending him to the Illinois Derby, which would make for a very quick turnaround.

15) Ring Weekend (50): Was the Tampa Bay Derby a fluke? He followed it up by getting trounced at Calder.

16) General a Rod (40): Is he one-paced? He failed to get by Wildcat Red twice at Gulfstream Park, and may be one of many near the early pace in a few weeks.

18) Candy Boy (30): Will he improve leaving Santa Anita? That surface isn’t always kind to closers, and maybe that’s what he wants to be.

19) Cairo Prince (24): Which one do we get ~ the Cairo Prince who blitzed the field in the Holy Bull or the one that never fired in the Florida Derby?

20) Uncle Sigh (24): Is the Wood a throw-out? He missed the break and ran a race that may be better than it looks on paper.

21) Vinceremos (20): Is the Blue Grass a throw-out? He’s never run worse than second on conventional dirt.

22) Harry’s Holiday (20): Is he better on synthetic surfaces? He has two wins on dirt, but none against stakes company.

23) Commanding Curve (20): Is he classy enough? He possesses a strong late kick, but has never beaten winners.

24) Pablo Del Monte (20): Is he the same horse away from Keeneland? His best run away from that track was a distant third in the Hutcheson.

25) Bayern (20): Is he a “need the lead” horse? He sat a dream trip in the Arkansas Derby but couldn’t stay with Danza or hold off Ride on Curlin.