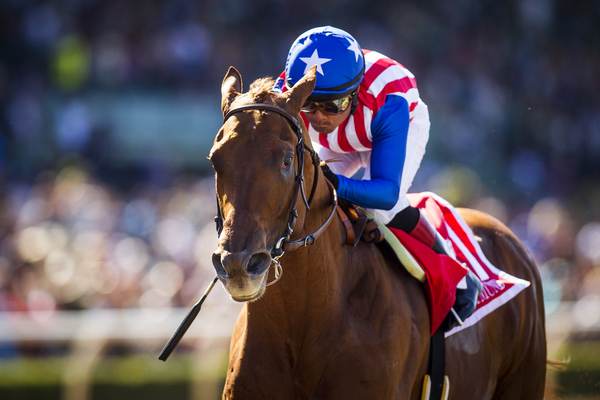 Check out the replay of the 2015 Kentucky Derby, one of the great horse racing results in recent history. Watch as Dortmund and Martin Garcia gamely try to fend off eventual winner American Pharoah and runner-up Firing Line:

A Brief History of Dortmund

In the 2015 Kentucky Derby, undefeated Dortmund entered as the second-choice and the second half of a potential one-two punch for Hall of Fame trainer Bob Baffert. Unfortunately for Dortmund, his stablemate, American Pharoah, won the Derby, but Dortmund finished a respectable third in a field touted as one of the deepest, most talented crops of three-year-olds in recent years.

In the Derby field, Dortmund was just one of three horses sired by a previous Kentucky Derby winner. Dortmund’s sire, Big Brown, won the Kentucky Derby and Preakness Stakes in 2008 but joined the list of 22 other horses who have won the first two legs of the Triple Crown and did not win the Belmont Stakes. Big Brown failed to even finish the race but has started a successful career at stud. Dortmund’s dam, Our Josephina, was a moderately successful racehorse with an excellent pedigree that gives Dortmund connections to Storm Cat, Mr. Prospector, and Northern Dancer.

Dortmund caught the eye of many fans and handicappers early along on the Derby trail for his size and heart. He actually failed to meet reserve as a foal because of his massive relative size, and today the colt stands an imposing 17 hands tall. Fans are also attracted to his heart and determination. Dortmund was one of few horses in Derby preps that faced an approaching horse in the stretch yet fought back for the win. Firing Line attempted to pass Dortmund in both of their races together, the Los Alamitos Futurity and the Robert B. Lewis Stakes at Santa Anita, but was denied the win. Firing Line exacted revenge in the Kentucky Derby by placing second over Dortmund and just a length behind American Pharoah. Dortmund and Firing Line will meet for the fourth time in the Preakness Stakes at Pimlico.

Scroll over any box below to view the records to date for Dortmund: