It's been five years since I wrote a blog on how I felt about the news that Rachel Alexandra was going to meet Curlin in the breeding shed. For those who didn't read that piece, let me summarize: it was essentially one long plea to Stonestreet Thoroughbreds to not race the eventual baby.

It's not that I don't want to see the potentially meteorically-talented product of two of the best horses of my generation. I really do. And - taking it one step further - having been one of the lucky ones to see both Rachel Alexandra and Zenyatta train/run, no one wants to see their kids meet in a starting gate and settle what their mamas never did more than I... but if this game teaches you anything, it's to run screaming from the hope of hype as fast as a two-year-old at an in-training sale. 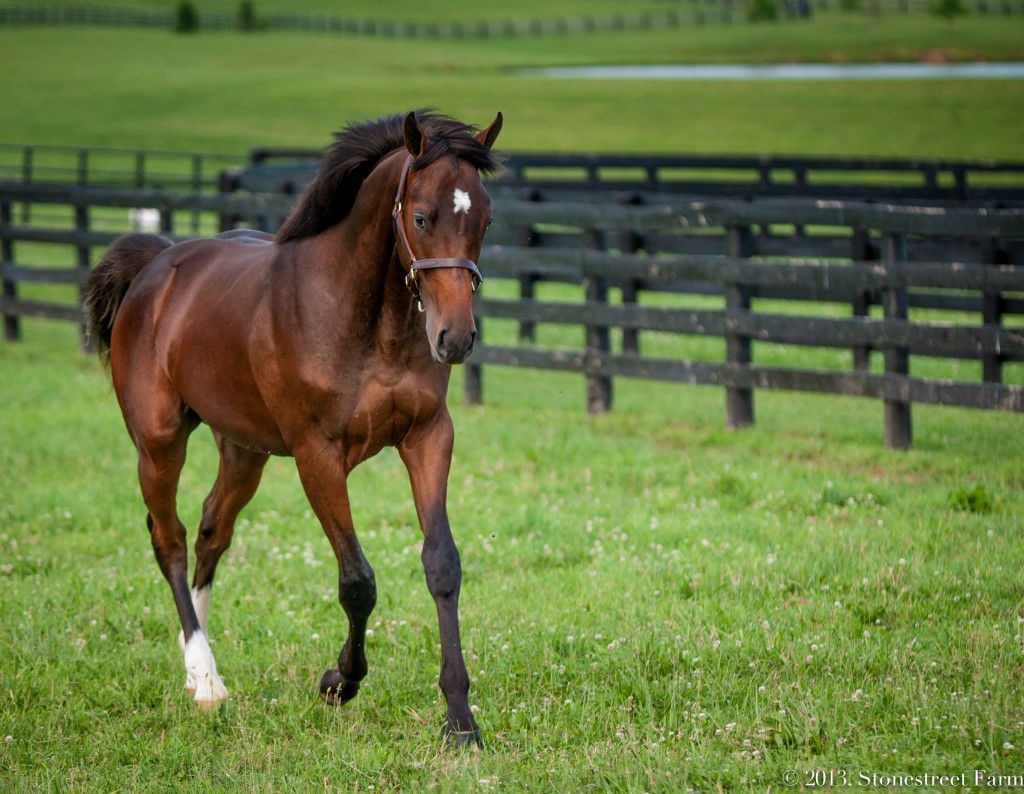 Jess's Dream as a yearling

According to what we're hearing out of the Gulfstream Park racing office, we're going to see the debut of the first foal out of Rachel Alexandra and sired by Curlin before the start of 2015. Trained by Kiaran McLaughlin, Jess's Dream will be starting on either December 26th or 27th based on which race in the conditions book fills.

Interestingly, the dark bay colt who was nicknamed Taco as a baby hasn't had the most consistent workout pattern: Jess's Dream trained most of the summer at Saratoga then at Stonestreet's private training center, and this pattern suggests it's safe to assume that he's not quite as sound as his parents, who raced a combined 35 times over their careers.

Curlin did not run as a two-year-old, but burst onto the scene in February of his three-year-old year with an emphatic near-13 length debut victory at Gulfstream Park when trained by Helen Pitts. After a private purchase, and a Rebel Stakes win, he captured the Arkansas Derby by a monster 10-1/2 lengths before finishing third in the 2007 Kentucky Derby to Street Sense and Hard Spun. The coppery chestnut son of Smart Strike then won the Preakness before falling a nose short to the phenomenal filly Rags to Riches in the Belmont Stakes. Curlin would then rattle off five straight victories (including the 2007 Breeders' Cup Classic and 2008 Dubai World Cup) before running second his in lone turf start and ending his career with a loss to Raven's Pass in a failed defense of his Classic crown. Voted into the Hall of Fame in his first year of eligibility, Curlin was named Champion four times: two Horse of the Year titles, 3yo in 2007 and Older Horse in 2008.

As a stallion, Curlin has certainly matched his on-track prowess: in 3 crops of racing age, he has sired Belmont Stakes winner Palice Malice, as well as 13 additional graded stakes winners.

Rachel Alexandra found herself in the Asmussen barn in much the same situation: trained by Hal Wiggins through her juvenile season that saw her capture the Golden Rod, the big dark bay daughter of Medaglia d'Oro went undefeated in her three-year-old year with eight wins in eight starts, including the Kentucky Oaks. After that near-20 length score, the filly was walked a few barns over on the Churchill Downs backstretch before beating the boys the first of three times in an emphatic Preakness win. 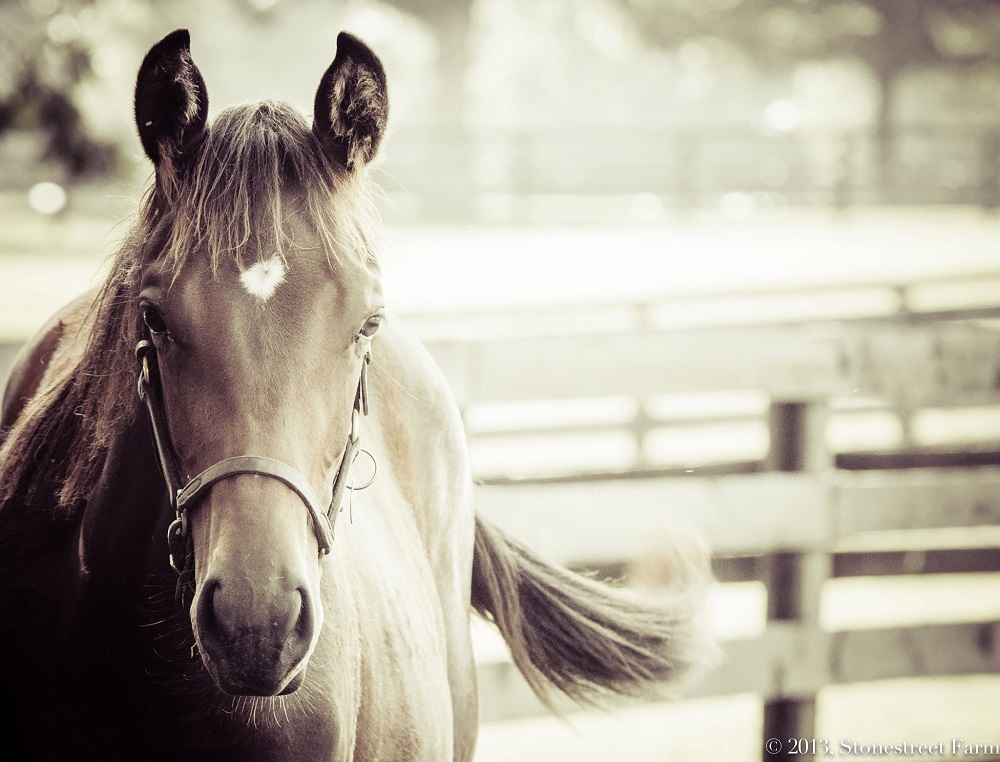 Among Rachel's further stakes wins were the Mother Goose, the Haskell, and the Woodward - all in devastating fashion. Jess's Dream is her first foal and there is a beautiful Bernardini yearling filly to look forward to; though due to foaling complications, whether the superstar mare will ever be bred again is in question. Surely a first-ballot Hall of Famer in the future, Rachel Alexandra was named Horse of the Year for her 2009 season as well as champion 3yo Filly.

So with lineage like that - you may be asking - how could I suggest not racing the baby?

Because the odds of that foal being anywhere near as talented as either - let alone both - of its parents are super slim.

What's interesting is that Curlin and Rachel Alexandra are - without a doubt - the best horses in their families (going back four generations). Rachel's dam and her second dam may be mild exceptions: Lotta Kim won the Tiffany Lass Stakes, and grandmother Early Decision won the Buddleia Stakes. Even Curlin's full brother Deputy Striker wasn't much to speak of, breaking his maiden in his final of six starts.

The list of champion mares who have thrown quality horses is highlighted by:

The great Xtra Heat (2001 3yo filly) is somewhat of an exception: the freakishly fast mare threw 5 winners from 8 starters of the 10 foals she's had, and they've won $627k. Her broodmare career started out as quite the budding dynasty: her first foal was Southwestern Heat, a stakes winner who was G3 placed and is now a stallion in New Mexico. Her next foal was stakes placed X Rated Cat, then stakes winner Elusive Heat, and that's where the trail takes a turn... even though she's been bred to several of the same stallions, Xtra Heat's recent foals just haven't made names for themselves like her earlier ones did.

Azeri (2002 Horse of the Year & 2002-2004 older mare) may be a sign that times are changing for champion mares: 4 of her 7 foals have won a combined $1.1 million, with Wine Princess (by Ghostzapper) the standout, but Arienza (by Giant's Causeway) was a strong second in the 2011 Fantasy Stakes, and Take Control (by A.P. Indy) suffered a catastrophic injury before he could show his true ability beyond maiden and Allowance victories.

With the likes of Havre de Grace, Groupie Doll, Plum Pretty, and - yes even - Zenyatta's first foals either waiting to be born or to make their debuts... there is a lot more on the line for these genetically gifted equines than just whether or not they wind up in the winner's circle. They have legacies to maintain!