Thoroughbred racing fans on both coasts realize that they have to set their alarm clocks much earlier this Saturday morning as Meydan Race Course in Dubai offers the latest edition of the ultra-lucrative Dubai World Cup Day card featuring a staggering $30 million in total purses.

Since its inception 20 years ago, the Dubai World Cup has proven to be one of the sport's signature races. Cigar, the two-time horse of the year who retired with career earnings just shy of $10 million, outfought Soul of the Matter to win the inaugural Dubai World Cup on a Wednesday morning in 1996. Since the initial showdown in the desert, the World Cup has been a major target for owners and trainers from across the globe, an international spectacle that rivals the Breeders' Cup in purses and prestige.

You can watch the Dubai World Cup race on Fox Sports 1 from 12:30pm ET, sponsored by BetAmerica.

Saturday morning's card begins promptly at 8:40am on the east coast and 5:40am on the west coast and the opener, the Grade II, $1 million Godolphin Mile features one of the true standouts at the Dubai Racing Carnival this winter in Tamarkuz. After running second to Faulkner in a seven-furlong stakes in early January, Tamarkuz has won three straight races at one mile on the main dirt track and the five-year-old Speightstown stallion could prove to be the shortest priced winner on the card.

But the very next race the card, the Grade II, $1 million Dubai Gold Cup at two miles on the turf, could be the most wide open event on the program. Brown Panther is the lukewarm 4-1 morning line favorite and will start from post 14 after being idle since finishing 11th in the Breeders' Cup Turf last fall at Santa Anita. He is one of only two horses to own a win at the demanding distance, but his post and long layoff signal that he's worth playing against.

In fact, two horses that exit the same prep are certainly worth backing. Almoonqith, who won a Grade III stakes over the course last out for trainer Mike de Kock, is 8-1 on the morning line and looks capable of getting the distance. Rio Tigre, who was second to Almoonqith in that Grade III prep, is listed at 12-1 on the morning line and has every right to improve in his third start over the course this meet. 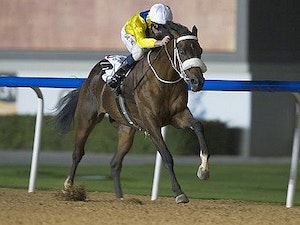 While the opening stakes features a standout and the second one looks wide open, the next event, the Grade II, $2 million UAE Derby, is the first genuinely intriguing race on the card. For two of the runners it could be a prep for the Kentucky Derby.  The likely favorite in the UAE Derby is Mubtaahij, an impressive winner of the Al Bastakiya at the Preakness Stakes distance of one mile and three-sixteenths three weeks ago on the Dubai Super Saturday preview card. The Dubawi colt trained by de Kock simply devoured the previously unbeaten Sir Fever and drew clear in the lane to a three-length score in 1:59.08 - there is no run-up to the beam at Meydan so final times appear two seconds slower than normal - and then galloped out like a horse that would relish one-mile and one-quarter.

Japanese invader Golden Barows has won his last three starts on the dirt track at Tokyo Race Course after finishing second in his career debut on the turf there. The Tapit colt out of a Mayakowsky mare was bred in Kentucky and appears to thrive on the dirt. He was the odds-on favorite in each of those three victories and he will likely get solid support here in the UAE Derby, although Mubtaahij has three wins over the Meydan strip.

One race later is the wide open, Grade I, $1 million Al Quoz Sprint at five furlongs on the grass. Sir Maximilan won the prep, the Grade III Meydan Sprint, but he was a 30-1 outsider that day and will likely be one-third that price this weekend. The genuine value play appears to be Ahtoug, who was second in the prep at 9-2 and second in last year's Al Quoz after running second in the prep behind the highly regarded Shea Shea, who he beat on World Cup Day.

Then one race later the Grade I, $2 million Golden Shaheen at six furlongs also appears to have potential value. The United States contingent of Salutos Amigos, Big Macher and Secret Circle all look good on paper, but all three will have to race without Lasix in Dubai and that could certainly prove detrimental and means they're not worth backing at short prices.

Shaishee, a Virginia-bred runner, won the prep for the Golden Shaheen but the race looked suspect on paper and former Golden Shaheen champion Krypton Factor did not fire that day and neither did US invader Cool Cowboy. But those looking for a shocker should look no further than Speed Hawk, listed at 30-1 on the morning line, a runner who closed ground furiously in the lane of the prep and could overhaul this group at a huge price.

10 runners will go to post in the Grade I, $6 million Dubai Turf where European invaders The Grey Gatsby and Solow will garner much of the attention. But onlookers seeking a value play need look no further than Cladocera, a talented four-year-old filly who has been ultra impressive in her last two outings over the Meydan turf course and is certainly worth backing at her 12-1 morning line price. 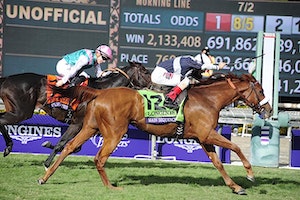 While the Dubai Turf looks more like a Grade II race, the Grade I, $6 million Dubai Sheema Classic at one-mile and one-half on the turf could be the best race of the day. Among the serious contenders are Main Sequence, the reigning champion United States grass horse and older male, Flintshire, a well-traveled sort for trainer Andre Fabre and Designs On Rome, the unquestioned king of the lawn at Hong Kong.

Main Sequence emerged on the scene last summer for Maryland-based trainer Graham Motion and promptly won four Grade I races on the grass, capped by a stellar performance in the Breeders' Cup Turf which earned him two Eclipse Awards, one for champion turf runner and the other for older male. He kicked off his current campaign with a sharp score in the Grade II MacDiarmida Stakes on the lawn on Gulfstream Park last month.

Flintshire sports  4-5-0 slate and earnings of nearly $4 million in 12 starts on the grass for Fabre and after running second in the prestigious Arc De Triomphe at Longchamps, he finished second to Main Sequence in the Breeders' Cup Turf then ventured to Sha Tin Race Course in Hong Kong and won the Hong Kong Vase. Designs On Rome has won his last three starts in Hong Kong and now seeks to prove he is the best grass runner in the world. 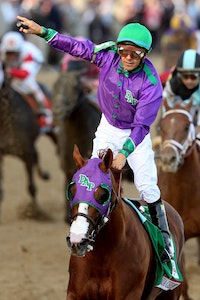 Then in the finale, the $10 million Dubai World Cup, much of the attention will be on California Chrome, the reigning United States Horse of the Year who won the Kentucky Derby and Preakness last spring before having to settle for fourth in the Belmont Stakes. He kicked off his current campaign by running second to Shared Belief in the San Antonio, but is one of the runners that cannot benefit from Lasix in Dubai and he does look vulnerable as the obvious favorite in international pools which typically take the majority of the money from the U.S.   That said, all American racing fans would love to see Chrome win and you can't lose when taking advantage of BetAmerica's very generous offer refunding $10 win wagers should Chrome fail to win.

The upset play in the World Cup is Prince Bishop, who has been second at short prices in each of his two local preps, including the latest to defending World Cup champion African Story.  Prince Bishop is listed at 15-1 on the morning line but should be much larger in the international pools and is worth playing since his fondness for the strip is evident by his consecutive runner-up efforts in local preps.