It's a great weekend for Quarter Horse racing with an All Quarter Horse card Saturday at Indiana Grand Racing & Casino; the Dash for Cash Futurity and Derby at Lone Star Park; the Hobbs America Futurity at Zia Park and $125,000 Robert Boniface Invitational Sunday evening at Los Alamitos. 2015 AQHA world champion, Heza Dasha Fire leads the field in the Robert Boniface, a 440-yard stakes, with the winner advancing to the $600,000 Champion of Champions (G1) on December 10. 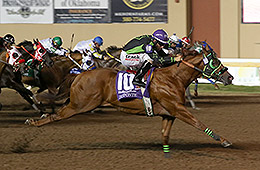 A quality mix of proven futurity winners and rising stars will compete in Saturday’s $384,615 Dash For Cash Futurity (G2) at Lone Star Park. Duponte brings big credentials to the final. The Bobby Cox homebred is the winner of both the $1 million Heritage Place Futurity (G1) at Remington Park on June 4 as well as the $268,000 Harrah’s Entertainment Futurity (G3) at Louisiana Downs in March. Trainer Josue Ponce will give a leg up to red-hot rider Manuel Gutierrez. His toughest competition should come from fastest qualifier, Eye N Capo who was impressive in his trial victory under jockey Damian Martinez.  Paint My Pilot, a Louisiana-bred son of Pyc Paint Your Wagon, is another capable finalist.

Lone Star will also run the final of the $235,600 Dash For Cash Derby (G3) on Saturday evening. The well-traveled TLC Dale has won five races this year, including a victory in the $191,000 Sam Houston Derby (G3) last April. Damian Martinez rides for Adrian Huitron. Fastest qualifier Politically Corrupt brings a three-race win streak into this final and will be prominent under Manuel Gutierrez. Tellereyematthebar from the barn of Brian Stroud has been solid at Sam Houston Race Park and Retama Park, and should be in the mix.

Post time Saturday night at Lone Star Park is 6:35 p.m. (CDT) with the Dash for Cash Derby to run as the eighth race and the Futurity as race nine.