Saturday will be a big day at Delta Downs as the track will host 15 trials for the $690,295 Lee Berwick Memorial Futurity (RG1).  The richest race of the 2016 Delta Quarter Horse meet is written for accredited  Louisiana-bred 2-year-olds. The action will get underway with an early post time of 3:50 pm (Central).

Each of the trials will be run at 350 yards, and a mix of proven stakes winners and lightly-raced juveniles will make for an interesting card.

Last year's Lee Berwick champion was the Lassie Futurity winner Jessa Louisiana Zoom and history could very well repeat itself as Louisiana Jewels, the winner of the $298,000 Louisiana Breeders’ Lassie Futurity (RG2) on May 20, is entered in the ninth trial.  The Jess Louisiana Blue filly is trained by Michael Taylor and will be ridden by Joe Badilla Jr. 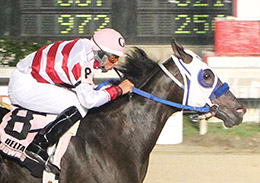 Another notable contender is Rdd Lajollanfastdash from the barn of trainer Willie Simien Jr. The speedy gray won the first official futurity of 2016, the 273,000 Mardi Gras Futurity (RG2) at Louisiana Downs last March.  Raul Ramirez Jr. has the return call, and will break from post position 7 in the fifth trial.

In addition to Ramirez, who is always tough in the big money events, riders to watch include top two in the standings: David Alvarez and Damian Martinez as well as Donald Watson, who rides first call for leading trainer Kenneth Roberts.

Many of the runners were purchased at the 2015 LQHBA Yearling Sale. The ten fastest qualifiers will return on July 9 with the winner of the Lee Berwick Futurity to receive a check for $345,147. The purse is up from $634,000 last year.
Racing
Loading...