The Remington Park 2016 Quarter Horse meet is well underway and will host racing Friday and Saturday evening and the Sunday matinee beginning at 1:30 pm.

In the trainer standings, it has become a two-man race with Eddie Willis winning 18 races and Clint Crawford with 16 wins. The other horsemen are over 9 wins behind following the first month of the racing season.  Ivan Carnero is off to a very good start, with 25 trips to the winner's circle. He leads Agustin Silva (18); Cody Smith (14) and James Flores (13).

The Oklahoma City racetrack is gearing up for a big night of racing on Saturday, April 23. Trials have been run for the $958,000 Remington Park Futurity , and following 22 races over two nights, the fastest qualifier was Teller Baja.  The speedy Oklahoma-bred filly won her trial in :16.597 seconds under jockey Agustin Silva.  Trained by Rick Robinson, she is a daughter of Teller Cartle out of the Tres Seis mare Baja Jazz. She broke her maiden at Remington Park on March 18 and will attempt her third win in a row in the very lucrative Remington Park Futurity. 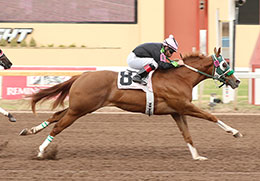 That night will also feature the final of the $307,000 Oklahoma Derby with the ten fastest 3-year-olds returning to action.  Jess Envision, a filly by Apollitical Jess, set the top time of :20.004 in her 400 yard trial on April 10. She is trained by Juan Aleman, and was ridden by James Flores.

With full fields and a very rich stakes schedule, there is much more on tap at Remington Park. Next month, trials will be run for the $1.1 million Heritage Place Futurity and the top older horses in the country will be invited to compete in the Remington Park Invitational.

More information on upcoming stakes is available at remingtonpark.com