Mena is a known jock. He's won some big races. In fact, the first 3 names in the Top 4 are known jockeys. After Mena, there's Shaun Bridgmohan, and Florent Geroux. Most horseplayers don't know the fourth name on the list, Adam Beschizza.

Miguel Mena rode Bravazo to a huge upset win in the 2018 Risen Star Stakes. Mena has been one of the top jockeys at the Fair Grounds for years. So far this Fair Grounds meet, Mena has 54 wins, 38 second place, and 37 third place finishes from 310 mounts.

Bravazo's Risen Star win has taken Mena to the top of the earnings standings as well.

Mena's mounts have earned over $1.59 million at the current Fair Grounds meet. Bravazo might go off the favorite in the Louisiana Derby.

Bridgmohan rode Zing Zang to a fourth place finish in the 2018 LeComte Stakes. Anybody who's followed horse racing for the past 20 years knows the name Shaun Bridgmohan. Bridgmohan has been aboard only 202 horses at the Fair Grounds meet.
That's a far cry from Mena's 310 mounts.

With that being written, Shaun's got 47 winners to Mena's 54. He also has 29 second place and 24 third place finishes. Shaun Bridgmohan won the Eclipse for Outstanding Apprentice Jockey in 1998.

Florent Geroux not only rode Gun Runner to a Pegasus World Cup win, he also rode Monomy Girl to victory in the Grade 2 Rachel Alexandra Stakes. 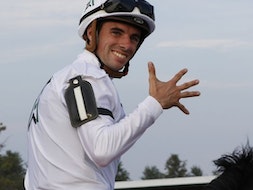 Beschizza almost pulled off a massive upset win in the Risen Star aboard 41 to 1 long shot Snapper Sinclair. As of Feb. 26, he's got one more win than well-known Fair Grounds' jockey Corey Lanerie. This is Beschizza's first time in the U.S. riding on a regular basis.
He's already made a mark. He's got a great sense of pace, which is why even though he's spent most of his career riding in Europe, he understands how to get a horse into an American dirt race early.

Beschizza could turn into one of the top jockeys in the U.S. He's already become one of Joe Sharp's favorite riders.

There are enough racing days left in the meet for any of the other 3 jockeys on this list to catch Miguel Mena. Also, Corey Lanerie is only a win away from being tied with Adam Beschizza. Could Lanerie end up on the top spot?

Keep tabs on the Fair Grounds to see!