The heat is on for the final two weekends of July in the Quarter Horse racing world!  This weekend, Ruidoso Downs hosts the $1.2 million Rainbow Derby on Saturday afternoon and Sunday's feature is the $1 million Rainbow Futurity.

However, next weekend is even more spectacular with 30 major stakes at racetracks across the country for both juveniles and older horses. Many of the contests salute state-bred runners.

Los Alamitos in Cypress California salutes California-breds with California Champions Night. There are 11 stakes races, highlighted by the $395,000 Governors’ Cup Futurity (RG2).  AJS Anna Smoke picked up his fourth win from his first five career starts while posting the fastest qualifying time in trials run on July 9.  The son of Separatist is trained by John Cooper and jockey Cesar DeAlba guided him to victory. 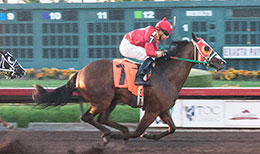 Ajs Annas Smoke will run in the $395,000 Governors’ Cup Futurity at Los Alamitos on July 30

Retama Park in San Antonio, Texas hosts its biggest race of the season, the $443,050 TQHA Sale Futurity.  Over in Oklahoma, the final of the Speedhorse Derby and Futurity will be run at Fair Meadows at Tulsa.

Saturday night, Indiana Downs will run the final of the $100,000 Blue River Derby and the $50,000 Heartland Futurity.  The fastest qualifiers return to action at Wyoming Downs in Evanston, Wyoming on Sunday, July 31.

Back at "The Mountain", Ruidoso Downs presents the Zia Festival with a weekend full of championship events.  The John Deere Ruidoso Juvenile Challenge for 2-year-olds is set for Saturday, July 30 and Sunday's card includes the Zia Futurity, Zia Derby, Zia Handicap and the Zia 870 Championship.

It's a good thing that July has 31 days!
Racing
Loading...