Five Trials on the Friday Card at Sunland Park

Nine Quarter Horse races will be run on the Friday, December 23rd card at Sunland Park. The first five events of the day are 400-yard trials for the Shue Fly Stakes (RG2).

Paul Jones, 14-time AQHA champion trainer, won the Shue Fly last year with Moonstruck Love, owned by Jose Luis Ozuna. The duo combine this year with First Kool Moon, who is entered in the fourth trial and will be ridden by Manuel Gutierrez. The son of First Moonflash has not run since August when he won his trial to the All American Futurity (G1) at Ruidoso Downs. 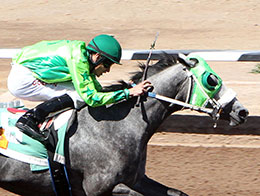 Another juvenile who should give a good account of herself is Running Dragon from the barn of Juan M. Gonzalez. She was installed as the 8-5 morning-line favorite in the last of five trials. The filly has earned $368,493 from eight starts, and she began her career with a five-race win streak that included a half-length victory in the April 24, 300-yard New Mexican Spring Futurity (RG2) at Sunland Park, and a neck victory in the 350-yard, $364,000 Mountain Top Futurity (RG3) at Ruidoso Downs.  Top New Mexico jockey, Adrian Ramos has the call.

The Shue Fly is restricted to New Mexico-bred Quarter Horses Magnifico Dragon, a son of Zulu Dragon won the $310,000 New Mexico Cup Futurity (RG2) on October 30 at Zia Park. He exits a second-place finish behind the top-rated 2-year-old in the country, Imperial Eagle, in the  $200,000 Southwestern Juvenile Championship (G1) on December 4. Magnifico Dragon, who will be ridden by Mauro Salcedo, in the fourth trial.

The ten fastest qualifiers will return to action on January 15 with an estimated purse of $200,000. Quarter Horses, just like Thoroughbreds, all celebrate a “birthday” on January 1, so these juveniles will race as 3-year-olds in the final.
Racing
Loading...