Forego was the Most Accomplished Horse in the 1970's

Not true. Forego was the most accomplished horse of the 1970's. It's not even close. See below for 4 straight years of magic that the gelded son of Forli and Lady Golconda provided horse racing fans during the Nixon-Ford-Carter Years.

Forego wins 3 Eclipse Awards in 1974 - Ridden mainly by the great Bill Shoemaker, Forego's greatness was on full display as a 4-year-old. In 1973, he finished 4th in the Kentucky Derby behind Secretariat, Sham and Our Native. That itself turned out to be an accomplishment. 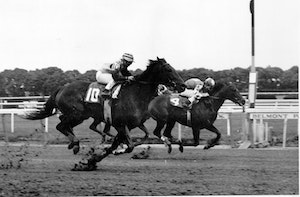 But it was 1974 when Forego proved what a special horse he truly was. In that year, Forego won the Donn Handicap, the Gulfstream Park Handicap, the Widener Handicap, the Carter, the Metropolitan, the Brooklyn, the Suburban, the Marlboro Cup, the Woodward and the Jockey Club Gold Cup. He won the Eclipse Awards for Top Sprinter, Top Older Racehorse Male, and American Horse of the Year.

Forego wins 2 Eclipse Awards in 1975 - Forego won American Champion Older Horse honors again in 1975. He also took home Horse of the Year again in 1975. Forego won 4 Grade 1 races:  the Widener, the Brooklyn, the Suburban and the Woodward. He finished second in the Marlboro Cup Invitational. He finished third in the Metropolitan. He also won the Carter, at that time a Grade 2.

Forego wins his 3rd straight award for American Horse of the Year in 1976 - Now a 6-year-old, many could have forgiven Forego if his form regressed in 1976. No form regression as Forego took home 4 Grade 1 wins again. The gelding took home the Metropolitan, the Brooklyn, the Woodward and the Marlboro Cup. He finished second in the Metropolitan.
Not only did Forego win his third straight American Horse of the Year Award, but he also took home honors, again, for Champion Older Male Horse.

Forego retired after a couple of races in 1978. He passed away at the age of 27 in 1997. Forego's race record was 34-9-7 from 57 starts. He made over $1.9 million dollars. Not bad for a horse in the 1970's. In those years, the Gold Cup was run at 2 miles. What it means is that Forego won races at sprint distances as well as at distances up to 2 miles. That's amazing considering that in this day and age, putting a horse into a 1 1/4 mile race is taking a risk. That's how good, and how special, Forego was. What a race horse.
Racing
Loading...